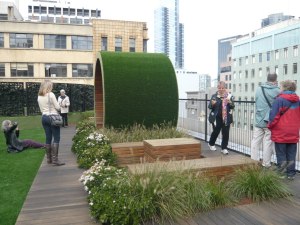 I know I’ve been posting a lot about Melbourne stuff lately, but it’s not my fault when there’s so much to do thanks to the State of Design festival! This weekend I forced my friends to get up bright and early to beat the queues for Melbourne Open House which is a genius idea that lets the hoi polloi discover some of the city’s buildings that are not always accessible to the public. A few years ago when I was in London my friends and I had a fabulous time at the Open London weekend* – exploring tunnels in the Underground, stumbling on a film studio and archive where we got to see costumes worn in Pride and Prejudice and visiting a morgue along the banks of the Thames where autopsies were carried out on bodies that had washed up from the river (which was dead interesting of course) – all for free and all within about a kilometre of my friends’ flat. While we did not find any morgues this weekend (not that we were really looking for one), we still managed to enjoy ourselves by checking out some of the rooftop gardens in this lovely city of ours (with 60 buildings open, we needed a plan of attack, and as I’m into all things green I persuaded my friends that we should focus on this category). 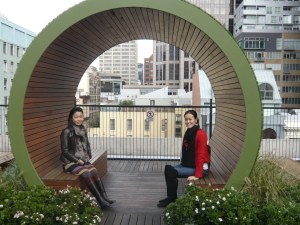 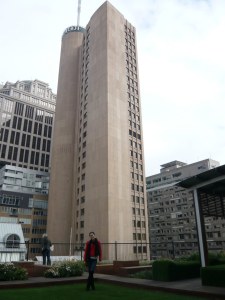 Our first stop was the rooftop garden at Origin (an energy company) which is at 271 Collins St. Disappointingly, all the green stuff you see is actually fake turf, but after more than a decade of drought and with weight of soil etc having to be taken into consideration when planning rooftop gardens, that was probably to be expected. Still not a bad place for employees to be able to hang out and eat lunch! 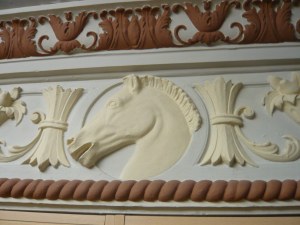 Next up was 131 Queen St, which is home to several offices including a language school and the tea rooms and art gallery of the Buddhist temple which, coincidentally, my dad belongs to. Interestingly, the building used to belong to the Victoria Club which had something to do with racing (hence the horse motifs decorating the inside of the building), and was the site of a massive robbery in the 70s – as far as I could gather from what we were told, some naughty people rented offices next to the Victoria Club and when there was a lot of money being stored there (after the Melbourne Cup racing carnival?) they went in and stole it, and basically hid out in their offices next door until things had quietened down before escaping. Not sure why the police did not think to check the offices, but it makes for a good story! 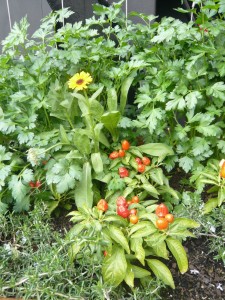 Anyway, the rooftop gardens on this building were only opened two weeks ago so I was curious to see them, especially as they are also growing veggies and herbs that can be used by the Buddhist tea rooms – well, that’s what I’d read, but how many Chinese dishes have you eaten that have rosemary, sage or Italian parsley in them?? Not many, I’d guess (although admittedly perhaps chilli would be used?). Strangely, that was what was planted in the little veggie bed, and there were also escapeliered olive trees lining the fences (olives also not exactly forming a staple of the Buddhist diet). I’m wondering if the gardeners actually consulted the cooks at the temple on what to plant or just went on their own merry way. 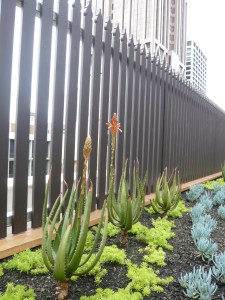 Apart from the inappropriate edible plants, I found the floor made of ground glass interesting – rain can soak through it so water can be harvested, plus it looks good and is nice and shiny on a sunny day. And we like shiny things. 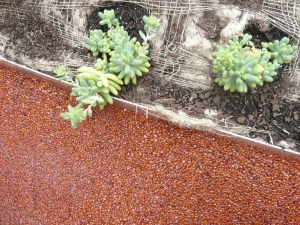 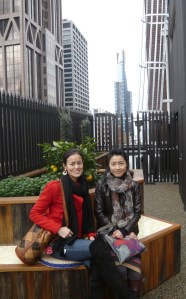 Last stop on the roof gardens tour was the Pixel Building which is not open yet but will soon be the office and showcase for the Grocon construction group. 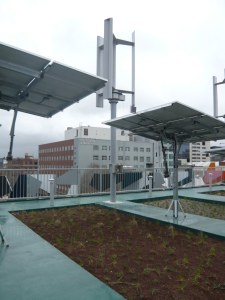 It’s got amazing green credentials like wind turbines and solar panels on the roof, a special cooling/heating system that uses no energy but does something magical with the air (my term, not theirs, but I’m not an engineer so I can’t remember exactly how it works) and there’s also plans to use methane gas captured from waste to power the hot water system. Amazing stuff… and aren’t the colourful metal flags outside pretty? 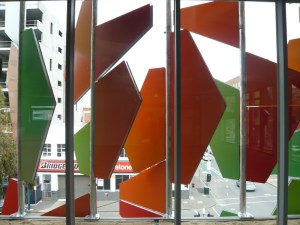 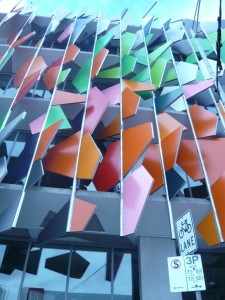 We also checked out the Melbourne City Baths but no pictures were allowed (I know I wouldn’t want photos taken of me when I’m swimming, as glamorous as I look in my fetching Speedos, goggles and pink bonnet de bain). I took a few at Donkey Wheel House, which is home to various not-for-profit groups including Kinfolk and is such an old building it even has a ballroom (in desperate need of repair). Aah, to have lived in an era when it was quite normal to go to a ball… although I can’t dance in this life, so there’s no guarantee I would have been able to even as a Victorian lady, especially if I’d had to wear a corset. But I digress. (Which is highly unusual for me, I’m sure you’d agree). 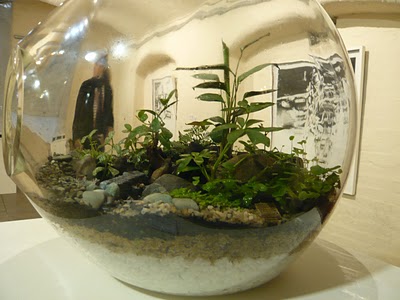 This terrarium is from one of the gallery displays at Donkey Wheel House and I just took the photo to remind myself that one day I want to make a terrarium, because, you know, they’re like a little world inside a glass container, and that means I could be in charge of a whole world. I think I’ll leave you with that happy thought.

*Do any other cities have this kind of thing? I’d be interested to know!