Often my weekends are a leisurely affair involving slobbing around the house in tracksuit pants catching up on whatever I didn’t get done during the week and making feeble plans to tidy/dust/get a life/file receipts/ which never come to fruition. However, the trackies did not stand a chance this weekend – Saturday was devoted to wedding celebrations (Siri’s, not mine!) and Sunday was all about the Fair@Square festival, but more about that in the next post. This one’s all about the wedding. The big, fat, Greek (on the groom’s side)/Sri Lankan & Thai (the bride) wedding. 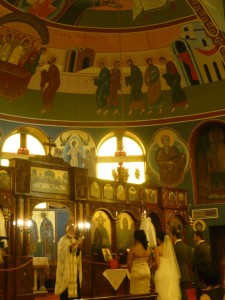 As there had already been a Buddhist (ie Thai) blessing ceremony, the actual wedding was at a Greek Orthodox church. Did you know that Greek priests (well, this one, anyway) are sticklers for being on time? I was in charge of transporting the bride’s mother and sister and we took a wrong turn off the freeway and were therefore 15 minutes late… and when we arrived, the wedding had already started!! Oops… it was a beautiful ceremony, although mainly in Greek so I spent much of it only imagining what was going on and admiring the frescoes and chandelier (I’m sure it’s not called that in a church but you know what I mean). 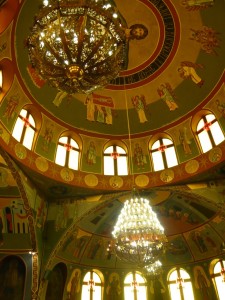 After the ceremony we all lined up to kiss the happy couple, then filed outside to blatantly disregard the sign on the church wall that said “strictly no confetti or rice”. I didn’t throw any but lots of people came prepared and we made a bit of a mess, although I was still surprised that the church cleaners brought out a vacuum cleaner to tidy up practically immediately afterwards!

We made our way to a lake to have photos .. here you can see the couple and their families being snapped, with the bride’s sister, Tidha, and her dad in the foreground. I made Tidha’s dress… it’s the same pattern as this one. Doesn’t she look glamorous?

And here I am with the maid of honour, Veronica. As you can see I decided on the green dress after all… 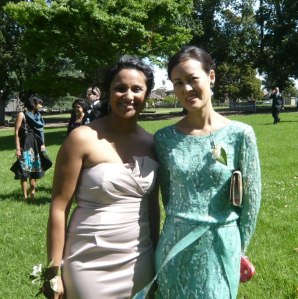 My camera doesn’t excite me at the best of times but it annoys me the most at functions like this – I have just realised I don’t have any really good photos of the bride and groom because either there were people in the way (OK, not my camera’s fault) or the light was too strong (when we were outside) or we were inside and the flash is extremely unflattering and makes everything blurry or too exposed. So I’ll try to get some pics from other friends and post them later, but for the moment here’s the beautiful bride with her new husband at the reception centre performing the Sri Lankan ceremony…

…thank goodness the groom is Greek through and through, or they would have had to go through FOUR different ceremonies! I think after the three they have already had, they are well and truly married.
There was Greek dancing and a delicious cake made by the bride’s friend using FIFTEEN DOZEN eggs… I was rather glad I had decided on the green dress option!