Not long ago I had the pleasure of styling a fashion shoot involving some pieces from The Eternal Headonist. While I was picking them up at their Kensington HQ, my eyes wandered around the studio space and of course were drawn immediately to the most colourful, bejewelled object visible, namely, this hat. 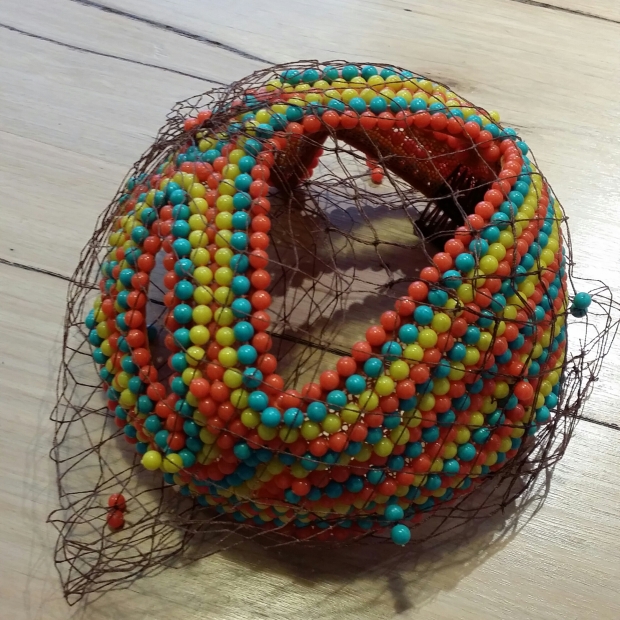 It also turned out to be pretty much priceless, as it’s a vintage piece by much sought-after label Bes-Ben and is not for sale as the Headonist Herself can’t bear to part with it just yet. She did, however, let me try it on (sorry for the bad pics, I was in a rush, these were taken on my phone, the usual excuses, blah blah…).

Fortunately it was a little too small for me (women obviously had smaller heads back in the 1940s or whenever this was made!?) but it did give me an idea of what to do if I happen to find strings of plastic beads at an opshop – turn them into a beanie made from beads, which would, of course, be called a “beadie”.
The hat is made from strings of beads that have been sewn onto a sturdy base, which can be found at just about any craft shop (especially just before racing season!) but a similar version could be made using a normal wool beanie too.

I should mention perhaps that the beads are not normal ones with holes in them strung onto string, they are the kind that actually moulded onto some cord, so you can even cut the string to the right length without all the beads falling off. AND they’re the kind of beads you often find at an opshop. Sounds like this is the perfect project for a thrifty vintage-loving DIYer – and if you start now, you should have perfected the art of the beadie by the time racing season rolls around!  Alternatively, you could start saving your pennies and buy an actual vintage piece like this… click on through to The Eternal Headonist website and see if anything takes your fancy.

2 thoughts on “Beadie inspo from Bes-Ben”