When most people think of Tokyo*, I’d assume bright flashing lights, crazy shopping, jam-packed trains and general hustle and bustle come to mind. Of course the city has all those things (and much more) – but I thought I’d show you one of my favourite little retreats instead.

Located about 10 minutes’ walk from Meguro station (past this cult-status vintage kimono shop), entering the grounds of the Tokyo Teien Bijutsukan (Tokyo Metropolitan Teien Art Museum) is like being transported back in time and place.

The property was the residence of Prince Asaka in the 1930s and 40s and as it hasn’t been altered much, still evokes all the grace and elegance of that era. The doors in the foyer are by Lalique!

When I lived in Tokyo I visited this museum quite often as the building and all its fittings and furnishings are so beautiful, the garden is gorgeous and it’s usually pretty quiet, but also because the exhibitions it hosts tend to have connections to the art deco period and it’s one of my favourite eras of design. (The photos in this post were all taken in the main building. There was another art deco exhibition in the museum’s annexe but no photography is allowed in that section.)

If Agatha Christie ever wrote a Poirot mystery that was set in Japan, surely it would have to be filmed here. I can just imagine house guests dressed to the nines and crowded around this window trying to catch a glimpse of a murderer/military spy/jewel thief running off through the (perfectly trimmed) shrubbery…

The exhibition that was on when I visited this time was about art deco furniture and homewares and included settings like this one – so simple but so refined.

Even if there were nothing extra on display though, there’s much to admire. I love the painting (mural?) over the dining room fireplace.

There’s just something about a chequerboard floor, too. It’s on my list of “things to have when I’m a grown up and have my own place”.

This particular floor is in what I suppose is a sunroom, but the day I went it was pouring… 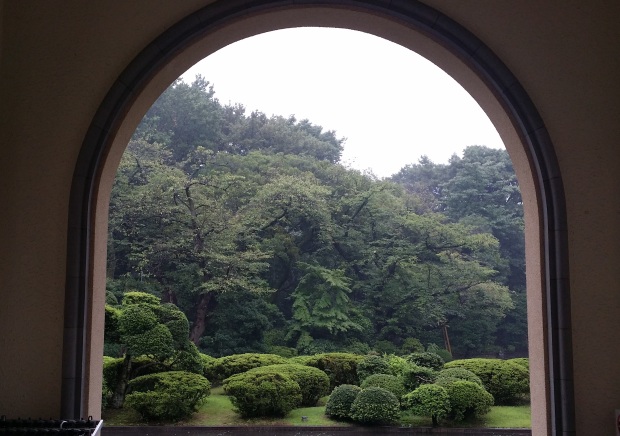 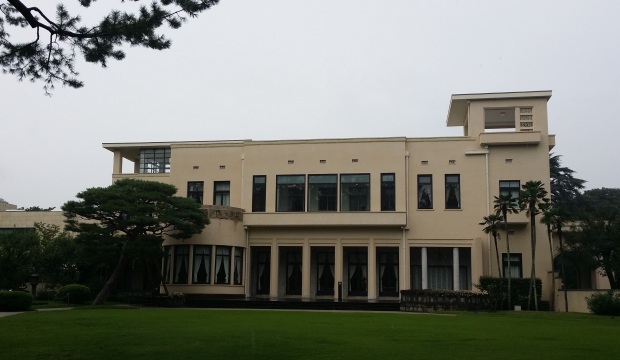 There are some artworks in the garden but part of it was closed for maintenance, and that combined with the deluge (which of course stopped practically as soon as I left the grounds… typical!) meant I didn’t spend as long as I’d have liked outdoors.

If you are lucky enough to be in Tokyo and want to visit the Teien, I’d allow a few hours as it’s definitely not a place that’s designed for rushing around. Apart from the exhibitions in the residence and annexe, there are two gift shops with plenty of tempting art, design and fashion books that you’re not likely to find elsewhere (most are in Japanese, but you can still enjoy the pictures!) and a cafe from which I would have loved to sip tea at my leisure and watch the rain, but I had to go and meet friends. It’s already in my diary for next time though!

*I was in Tokyo from late August to early September to visit friends and also to represent the Mulberries brand (ie the company I’d been working with in Vientiane) at the Tokyo Gift Show. As I was dressed in a Lao sinh but speak fluent Japanese I managed to confuse everyone when they realised I was not Lao or Japanese, or even HALF Lao or Japanese, but in fact .. Australian (half British ancestry, half Malaysian Chinese, in case you were wondering)?! Actually everywhere I’ve been in Asia recently, people have been befuddled by my appearance. Let’s hope I’m finally developing some kind of aura of oriental mystique and they weren’t just staring at me because the humidity was making me practically drip sweat from my eyeballs.

← Hida: the highlights
Tokyo, my Tokyo →

One thought on “Top Tokyo tip: the Teien Bijutsukan”