As regular readers would know, I have enough fabric in my stash to outfit myself for the rest of my life (and probably to kit out everyone else AND their multiple feline familiars at the retirement home for crazy cat ladies and gents where I’m planning on spending my twilight years).  So it’s not like I really needed to buy an embroidered linen tablecloth to turn into a dress. But I did anyway.

Normally I’d show you a before photo of whatever I’ve made, but I couldn’t fit the whole tablecloth in the shot! Here’s a small section of it instead – you can see how heavily embroidered it is and will probably understand how I couldn’t just leave it at the opshop even though it was a little bit torn and stained in sections. It was $12. 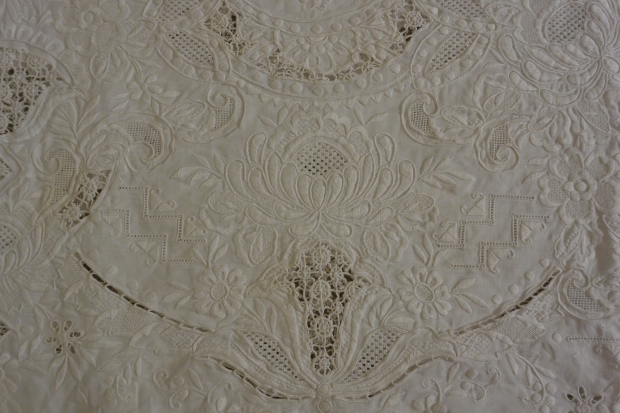 I’m still trying to work out whether it was actually hand embroidered… it looks like it, but it would have been an insane amount of work. Plus, I’ve cut it up now and if it was someone’s handiwork I would feel super guilty… then again, it was too torn and stained to be used as a tablecloth. So better that I cut it up, right?

The main reason I so wanted to make a dress from a tablecloth was for taking tiffin at Raffles. Can you tell what’s coming? Yes, I was going to make something ruffly and call the post Ruffles at Raffles…

But as you can tell from the title of this post, the ruffles didn’t happen – mainly because I ran out of time and just whipped up a quick T-shirt dress, but also because the embroidery is so thick it would have been nearly impossible to run gathers through it. It was difficult enough just sewing the front and back of the dress together! 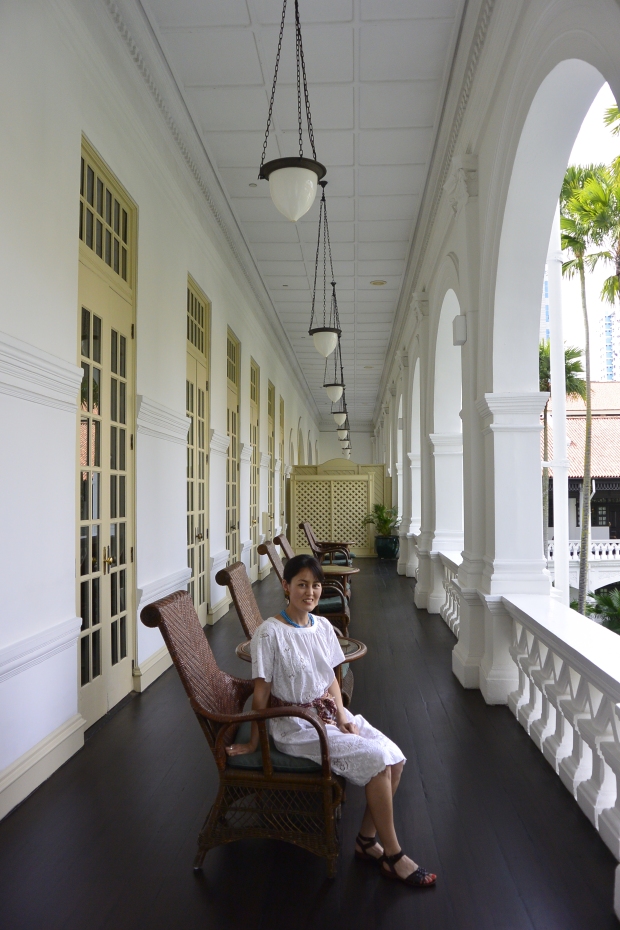 Enough about the dress, though. Let’s talk about Raffles!

I was lucky enough to have high tea and be shown around the hotel for a story I’m doing, so I got to see some areas that are usually only for guests. Extremely special guests. Like leaders of countries and royalty (these photos are on the balcony of the presidential suite where Will & Kate stayed!).

The hotel itself is everything you’d dream Raffles to be – stately and elegant with manicured sections of tropical jungle: basically the pinnacle of Singaporean colonial style. But it wasn’t the physical building or gardens that had me in thrall so much as the knowledge that I was in the very place where some of the world’s greatest writers composed their work, in particular (for me, that is) W. Somerset Maugham, who apparently often sat in the hotel’s palm court to write.

I only discovered him in the past couple of years, but love his short stories about life in colonial Asia with all its intrigues and British fashions and customs which must have been really so ridiculous transplanted in steamy, sweaty climes. Some habits should just have been left in England! But when it comes to the custom of high tea, I’m fully in favour of it being transplanted wherever it’s deemed fit. In other words, everywhere 🙂

3 thoughts on “Ruffle-less at Raffles”