If you’ve had enough time on your hands to be idly perusing this blog, then 1), you probably have less of a life than me, and 2), you probably will have noticed a recurring thread, ie I LOVE ETHNIC STUFF. Most of the time, though, I don’t like to wear it in its original state, partly because then it would look like I’m playing dress-ups but also because I have the (bad?) habit of NOT BEING ABLE TO LEAVE STUFF ALONE. I got this dress from a friend’s friend who couldn’t work out what to do with it but knew how much I love fiddling with stuff (she also bought me a silk skirt for $1 which I’m yet to attack). I’m fairly sure it’s from somewhere in south-east Asia, like one of the hill tribes in Thailand, as I have a top from there that’s fairly similar (and is also waiting to be fiddled with). Anyway, here are the before/after shots – it was originally like a long tunic covered in embroidery and fringing, and I made it shorter, fitted the top section, put a zip in the back and plaited the fringing so that it wouldn’t keep getting into my food/eyes/stuck in zips and car doors. The studded belt was from the Salvos for $3 and my heels were 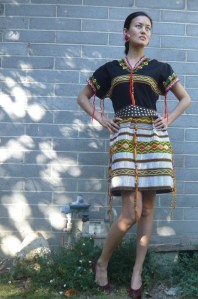 Lanvin from an op shop in Japan something like a million years ago. Earrings from a very un-PC accessory shop that was closing down, so they were like $1 or something.

If I could train these little visitors to my garden I would have got them to sit on my shoulder to add colour and make me look like I was in some exotic tropical locale the way Julianne Moore is doing in this amazing Bulgari campaign*, but although they’re very happy to stare at me through the window and bash on it to demand food when I’m doing the washing up, they’re not so into modelling.

*Although I adore this photo, it also cracks me up a bit that these sulphur crested cockatoos are meant to be exotic, because we have up to 20 of them flying around outside or

chewing up the pergola nearly every day!!

← No Studio, no life
Committing koromogae →