This is turning into a regular Monday event, isn’t it… my “what I did on my weekend” ramblings, I mean. The only reason I’ve been doing these sort of posts is because I have actually been doing stuff on the weekend, I mean otherwise you’d have to look at posts of me sitting around in my trackies, bothering my cat. And do you want to do that? My guess would be no. So to get back to what I was going on about…

I did mention that I would be working at the Remake Remodel tent at the Stringybark festival a few posts ago, so this post is all about that. 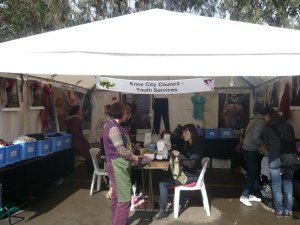 Remake Remodel is a little bit of heaven for budding young fashionistas that started at last year’s festival. We have great big blue crates full of clothes, material, ribbons, buttons, beads, thread – the works – and sewing machines set up on benches. Kids can come in and choose whatever they like from the boxes FOR FREE and then we help them remake and remodel it, also FOR FREE. Who wouldn’t be happy about that?

As you’ve probably realised by now, I LOVE making stuff out of crap so I am in my element when I get to show other people how to do it, despite 1) not normally going out of my way to hang out with kids and 2) being the world’s worst public speaker. Hand me some crap, ask me to make stuff out of it, and all that just doesn’t matter any more. 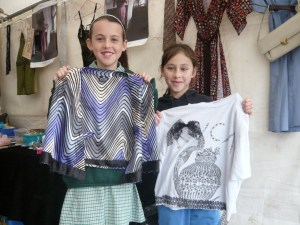 Myself and the talented Teresa were the two teachers for the activity but it’s a council tent so we had a lovely team of ladies from youth services there too, to natter away and gossip with us as much as help keep the kids occupied!

Here’s Teresa taking a little break in a rare lull – despite the shocking weather (ie torrential rain… and one of the volunteers had to scrape SNOW off her car when she left her house!) we were inundated with girls – and boys – wanting to make stuff, several of whom came last year too! Yes, that makes us feel popular!

I was in the tent for most of the time but here are a few festival pics…
What would a festival be without crazy people on stilts?

As the festival focus is on sustainability there were lots of native animals on show including this beautiful owl (not sure what sort it is).

There was also a huge wedgetail eagle on show, along with native rats, emu chicks (so cute but impossible to photograph as they were running around the whole time), lizards, goannas and snakes. I love the inappropriately placed sign here. 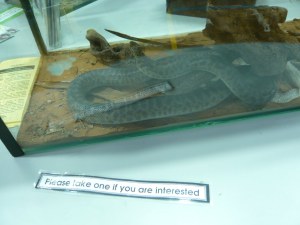 There was also a craft project on display which was so amazing it is getting its own post… stay tuned!

← Being Marc Jacob’s muse
Crochet your own coral reef →

4 thoughts on “Sewing the seeds to grow future fashionistas”