The making of the cheapest racewear outfit ever

Following Monday’s post on what I wore to the Cox Plate, I’ve decided to do the trendy craft blogger semi-tutorial thing and show you what went on and how much things cost in the creation of my outfit (tune out now if this sort of thing bores you senseless).
Originally, I had wanted to make a Miu Miu-like dress like this, but in red and without the decorations. (pic from style.com)

Simple but stunning, yes? And I would wear it ALL THE TIME, with a jumper underneath in winter, by itself with lots of accessories in autumn, etc… However, I could not find any suitable red material at op shops despite visiting something like 20 over the past few weeks (not exactly a hardship, I admit). Yes, I COULD have bought new material from a real shop, but I like to be obstinate and challenge myself by only using second hand stuff (plus, more to the point, I am a total tightarse).

Anyway, this is a roundabout way of explaining why I did not actually start on the outfit until a week before the event – I stubbornly clung to the belief that the op shop gods would send me something. As it was not to be, I ended up having to use what I had at home.

Fortunately several months ago I bought a package of several kinds of black material at an op shop for $5, included in which was this black chiffon-y sort of stuff. I’m not a chiffon-y sort of girl but I had to use what was at hand, so dreamed up a 50s style wiggle dress. Not that I have anything to wiggle (more on that later). (cost = about $1 as I did not use all the material)

As the chiffon-y stuff (nylon??) was very sheer, I needed to put something underneath, but not having any basic black to use as lining, I had to beg an old white inner sheet from my mum… (cost = nothing) … and yes, I realise it’s quite see-through! Thank goodness for skin-coloured undies! 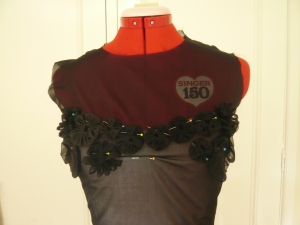 It would have looked very simple with no decoration, and I had to do something to give me the appearance of having feminine attributes, so at strategic points I added yo-yos made of kimono material as well as daisies and flat pom-pom-like things made out of nylon ribbon that was $1 from an op shop. (cost = about $2 .. probably not even that much as the kimono material was scrap and I did not even use a quarter of the ribbon).

I also used the flat pom-pom things to decorate this Asian rice farmer’s hat which my sister gave me. I cut about 6cm of the brim off, sewed the pom-pom things on, and made a hair tie and a hatband out of dark pink kimono fabric and elastic which was fairly ineffectual in the wind (refer to previous post to witness my embarrassment). (cost = maybe 50c all together).

Of course I also wore shoes, earrings and gloves and carried a clutch bag, but these were items I already had and I don’t remember how much they were… although in the interests of this post, the shoes were about $35, the earrings were a present, the gloves were from an op shop last year and were maybe $5, and the clutch bag was about $10 from a second hand kimono shop in Japan. But if I only count the things I made NEW for the races, the total cost was about $3.50!! 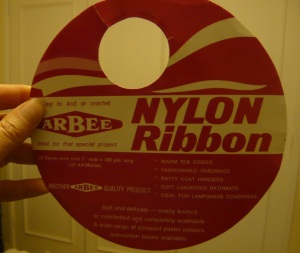 I have a lot of the nylon ribbon left over so will most likely be using it in future projects. I have a feeling it is rather old… its selling point is that you can make “warm tea cosies, fashionable handbags, natty coat hangers, soft luxurious bathmats… and … lampshade coverings”. NATTY coat hangers??! Tea cosies? I’m reckoning that it might be from about the 70s at the very latest, unless it is made by a craft company whose marketing department carries on in blissful ignorance of current trends!

← Cheapest racewear outfit EVER?
Caught up in the web of memory lane →

3 thoughts on “The making of the cheapest racewear outfit ever”