One of my friends is a food fiend. In fact, most of my friends are food fiends and so our social activities revolve around cooking and eating, although my skills do not really lie in the cooking department so I prefer to deal only in the eating part. Anyway, this particular friend is getting married in a few weeks and this weekend was her hen’s night. But one night is not enough time to fit in much serious eating, so it was decided that an afternoon chocolate tour would be the best way to start celebrations. We gathered in Melbourne’s Block Arcade which is home to one of chocolate’s meccas, Haigh’s.

Check out the Christmas decorations and these seriously cute novelty chocolates….

We got to try ganache and pastille chocolates at Haigh’s and hear the history of the Block Arcade (did you know the floor was covered in green felt during the Second World War so that hobnail boot-clad American soldiers who were stationed here wouldn’t wreck the gorgeous mosaic floors? And then for two decades it was covered in horrid lino until someone realised the mosaic tiles were more attractive and removed it in the seventies!), then stopped at a couple of other chocolate-vending places before heading to the Royal Arcade.

For my overseas readers, one of the things Melbourne is famous for is its arcades, so make sure you check them out when you are here! Look how gorgeous they are all dressed up for Christmas! And look how gorgeous this champagne truffle from Koko Black is… mmm… white chocolate ganache covered in milk chocolate and then dusted with sugar… *aahhghhh* (that’s meant to be the noise that Homer Simpson does when he thinks about donuts) 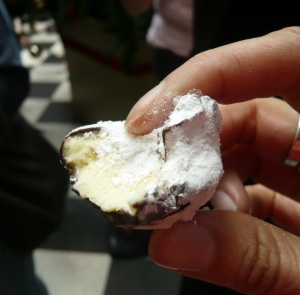 And yet more festive sweets…

Matrouschka dolls don’t have a great deal to do with Christmas but I love them anyway and there’s a shop specialising in them in the Royal Arcade, so here’s a snap of their window display!

We finished up at Hairy Little Sister, which sounds like the relative that everyone avoids mentioning but is in fact a cafe which is the last stop on the tour. I didn’t get any photos there as it was a bit dark but we were served chocolate mousse with raspberry sauce (or coulis, for those who like fancy food words) which was, naturally, delicious…
The rest of the weekend passed in a sugar rush-induced haze but I have a feeling more eating was involved before we all fell asleep in the wee small hours after watching a DVD back at our accommodation (yes, we really are such party animals) and getting up on Sunday morning for a breakfast at the Queen Victoria market which involved bacon, fried eggs and chorizo, none of which are on any detox plan that I’ve ever seen.
So after that weekend of waistline sabotage I was quite glad to hear that the catering at my interpreting job today was only sandwiches. I walked into the lunch room after the morning’s labours, innocently expecting something simple (AKA salad sandwiches) and was accosted by this sight. 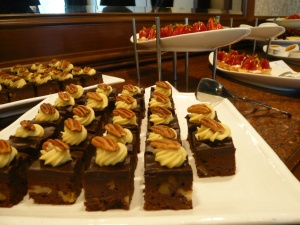 That’s right, Valrhona chocolate brownies and strawberry tarts and mini creme brulees as far as the eye could see… and that was just the dessert bar. I should have seen it coming – the job was at a FOOD EXPO at the LANGHAM HOTEL (famous for its afternoon teas) after all!

The plan after I finished at the interpreting job had been to meet friends at Southbank for icecream, but as I waddled there to meet them, I decided to opt for a drink and a walk along the Yarra instead. How could we not make the most of such beautiful scenery? Melbourne really knows how to put it on during the summer.

Here’s an outfit pic – this is probably the only time you will ever see me wearing anything so conservative (can you even SEE my earrings, they are that small!?) so have a good snigger while you can! I’m loaded down with freebies from the food expo – the Japanese manufacturers didn’t want to carry all their gazillion bottles of soy sauce, gourmet vinegar and whatnot back home for some reason so the interpreters and staff all left looking like bears who had decided they needed to build a storehouse of Japanese foodstuffs to get them through a nuclear winter.

These last two pics are just to show off more of the scenery along the river – this building reflecting the sunset was so shiny!! And I can never resist shiny! 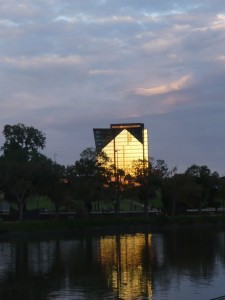 Category : massive diet fail (not that I'm on a diet), Melbourne, pre-wedding pig-out