In which I learn AGAIN that craft does not pay

Whoever said that crime does not pay obviously meant to say craft. Last time I checked, robbing a bank could yield you a gazillion dollars, whereas my profits from the weekend’s craft stall were definitely shy of that figure. (Warning: long rant ahead)

To give you an idea of how painfully shy of that figure they were, let’s just say that I spent over 50% of my profits purchasing stuff from other people’s stalls which added up to the grand sum of $23. So although I enjoyed trying to sell my wares at the Kingston Night Art Market (as you can see by my smiling face in this picture with my sister), I will not be giving up my day job and turning to craft any time soon.

Oh, whoops! I forgot.. I don’t have a day job. Or even a night job, for that matter. So maybe I should be considering craft after all. I mean people were offering me a whopping $20 for necklaces that take hours to make, so I could be rolling in it if I just gave up those little emotional stumbling blocks called “pride in my work” and “belief in fair trade“… (why is it that people are fine with paying a fair price for the craftwork of people in developing nations overseas, but baulk at shelling out the equivalent to artisans in their home countries?)(Dare I call myself an artisan? You know what I mean, anyway!) The next time someone suggests selling something that has taken three hours to make for a measly $20, I will suggest they work for under half the minimum hourly wage and see what they think!!
Grrr!
OK, rant semi-over, I did manage to actually sell some stuff prior to the market thanks to my sister sending out an email to all and sundry which linked to my post from last week. And not to name drop or anything, but one of the people who bought one of my pieces is way-cool Melbourne artist extraordinaire Tai Snaith (my sister has connections).
In a strange display of synchronicity, my sister’s work (a zombie hamster with its intestines intact, as opposed to the others which have exploding guts… check my last post for pictures) was purchased by another artist, Elise Hurst, who is well known for her illustrations in children’s books. If she is at all inspired by stuff she buys at markets, her future efforts may be a little more gory than these lovely illustrations which feature on the front of these cards, making them impossible to resist (I’m sure she stole Suki to use as a model for the cat one). 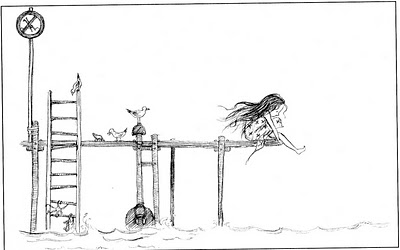 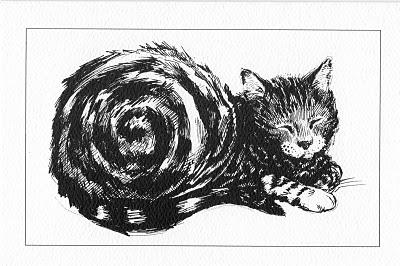 If you like these, you can buy them and see more of Elise’s work here. (I have to admit that I had never heard of her before the market but having just looked at her website, have realised that I was in the presence of an extraordinary talent and a prolific artist… who just happens to also be a lovely person who likes zombie hamsters.)
Apart from the cards, something else I could not resist was this lump of wood with gold paint on it, which is probably how unkind people would refer to this piece of Art Deco-esque-ish myrtle which I believe required a high degree of woodturning and polishing skill in its execution and was only $15. I plan to use it as a glamorous bookend. 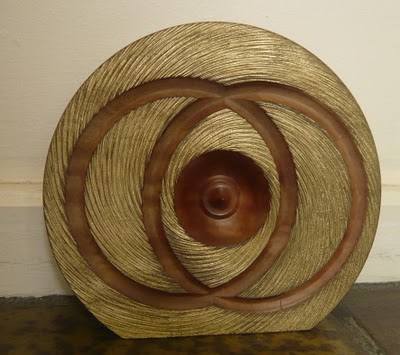 My friends and relatives who visited the market were somewhat shocked that I bought this as 1. it was brand new, unlike most of my purchases and 2. it was $15, which is a massive sum for me to spend on something that is not exactly essential, especially given my unemployed state. My sister pointed out that I wouldn’t have paid that much for it in an op shop but I retorted that it is brand new, so of course I had to exceed my usual threshold. She accepted that as perfectly logical, because it is. Given my rant about artisans not being paid properly, I really should have put in an offer of at least $100, but the price tag said $15, so who was I to argue… (hypocrite? who, me?)