Yeah, I know, Friday night, not cool to be sitting in front of a computer blogging in front of Go Girls (my guilty pleasure… anyone else out there love this soap from NZ?), and who reads blogs on a Friday night or over the weekend anyway? But couldn’t resist putting up some pics from this evening – the team at Moral Fairground managed to get onto The 7PM Project, a national TV show which, as the name suggests, starts at 7pm…

I rustled up some of the models from Cameron’s who are going to be strutting their stuff in the Fair@Square show over the weekend and waved the magic styling wand and hey presto… instant gorgeousness!! (OK, they were gorgeous before I even got to Fed Square, I just got to pick their outfits).

Below, from left to right, Alana wearing a dress from New Model Beauty Queen with a necklace from Emma Grace and bracelets from Beads For Wildlife; Alicia in my FOURTH DAUGHTER dress (it looks SOOOOO amazing on her, nothing like when I tried it on myself while making it… ) and jewellery from Paro Paro; and Louka in Kowtow Tshirt, Sinerji shorts, Etiko shoes and Mulberries scarf.

What do you think of he modelling efforts of the fashion show coordinators (ie myself and Fabia)? If there were modelling agency that specialised in pygmies, I would be in with a fighting chance. According to a magazine article I read a while ago, I am the average height of women in Australia, but you wouldn’t guess it looking at this photo. 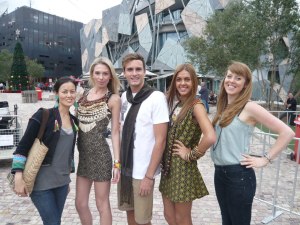 Oh well, at least I can be a model in my own bedroom… tomorrow’s my friend’s big fat Greek/Sri Lankan/Thai wedding and I still haven’t worked out what I’m wearing. I have a burning desire to wear red… but I’m not sure that this dress will stand up to the rigours of the FEAST that is in store at the reception…

…so I might have to go with this somewhat more demure minty green sparkly number…notice the LOOSE waistline. Think of this as a before pic, the after one won’t be this pretty!! 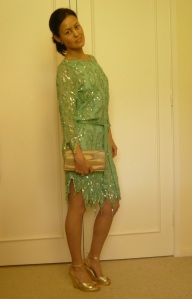