Dyeing to know your opinions! 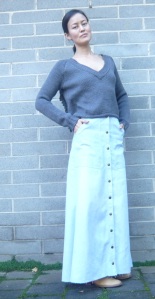 … so I was at Camberwell market a few weeks ago and happened on a stall selling dead stock. Everything was $5 each, so of course I couldn’t resist buying a few pieces, including this denim skirt with huge pockets which makes me think it’s from the ’70s.

Another thing that points to it being from that era is that it’s a size 10 and yet I could only just squeeze into it (thanks to ridiculous vanity sizing, these days I think I am more like a 6-8 even though I have definitely not shrunk since high school, when I was a size 10!! Although seeing as I rarely buy anything new, and Australia doesn’t have standard sizing, I’m not sure). Even weirder was that the skirt was about 20cm too long, which means the lady who it would have actually fitted would have been like a giraffe! I had to cut off the hem – I didn’t bother sewing it into a proper hem because I think it will actually look cool when it starts fraying properly. I also had to soak it in Sard because, being dead stock, it had been folded for ages and had lines of dust sort of ingrained into it. The Sard got rid of the dust lines, but unfortunately it also got rid of some of the colour, and kind of patchily at that. 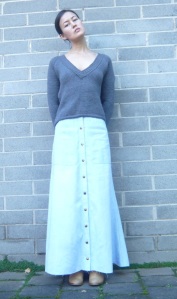 It doesn’t look too bad, although wearing denim this pale is just asking for trouble so I’d prefer it to be a darker blue. I don’t want to use a chemical dye though. Does anyone know where I can get an eco-friendly dye – I suppose something like indigo would be ideal, but I have no idea where I could find that here!?

(photo from here)
Ideas? Opinions? Anyone??

7 thoughts on “Dyeing to know your opinions!”