*All the sewing ladies.. all the sewing ladies…. here’s a simple DIY for you!
Years ago I made a dress from some printed Thai silk that was given to me, probably by my grandmother, but I don’t remember – when I say “years ago”, I’m talking nearly two decades. 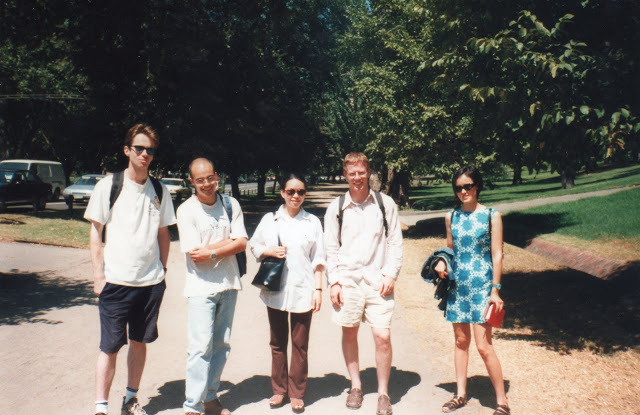 Here I am wearing the dress (on the right) with friends from uni (the one in the middle is Jena, who I ran into in the street last year after years of no contact whatsoever. Love those chance reunions!!)
When I made the dress I obviously wasn’t paying close enough attention as the pattern is ever so slightly off-centre. I wore it for ages without this bothering me, but eventually decided to add a distracting feature to draw attention away from the fault.

So I decided to put a ruffle on it. Distract, distract!!

Luckily I still had fabric left from making the dress initially – just enough for a long, wide-ish strip. I made gathering stitches along one of the long sides and then drew them up evenly and placed the resulting ruffle around my neck while wearing the dress. This allowed me to work out if it was too long/short and get it in the most flattering position. I then pinned it to the dress, starting by attaching it to either sides of the zip at the centre back.

Doing this let me position it evenly over my shoulders and across to the centre front, which is where I placed the midpoint of the ruffle. 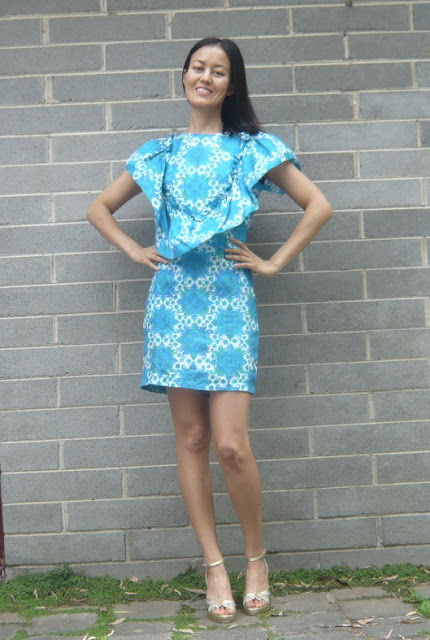 What do you think? Simple solution to fixing a fault, if you ask me. Adding a ruffle not only covers up mistakes, it also changes the silhouette of the dress – notice that because I look a bit wider at the shoulders, my waist looks smaller in contrast (and I even look like I have a bit of a butt?)?
Even if you’re not trying to fix anything, you could do this with a simple dress that you want to jazz up a bit – imagine a plain black one with a bright red ruffle, for instance (ooh, I think I might steal that idea from myself!).

Can I brag just a bit about this dress? Mischa Barton wore it when she was in Tokyo in 2007 to promote The OC. She chose it herself from a rack of other designer wear that my stylist friend had chosen for her! Here she is modelling it in Elle Girl.

And here we are after the shoot… I only just realised that in this pic I’m wearing ANOTHER creation to which I added ruffles! (I think I may be slightly obsessed…!)

More detailed shots of this top which I made from a dress here and here. And another ruffle idea here.