Just what does one wear in the presence of one of the world’s most prolific, creative designers? That was the question that faced me last Thursday morning as I rummaged through my wardrobe to dress for the media launch of The Fashion World of Jean Paul Gaultier: from the sidewalk to the catwalk. The obvious choice would be Breton stripes, but as I don’t own anything striped (am I the only person in the world?!) I went for my fallback multicultural look and mixed an op-shopped maxi-kilt with a Yao jacket I’d reworked, topped off with my Wilderness Bazaar earrings and a headband whose origins are unknown but that looks kind of Uzbekhi. It only occurred to me later that Gaultier is a huge kilt fan, so I was kind of dressed in a tribute to him without even trying too hard! Iolanthe played by his rules too, in stripes, leather and lace.

But I’m sure you’re more interested in seeing the man himself, so here he is, in conversation with the curator of the exhibition, Thierry Maxime-Loriot, who is nearly as charming as Gaultier (those French accents!).

Apologies for the blurry pic but I arrived too late for seating and the venue was really packed – I heard other guests saying it was the biggest media launch they had ever been to! The excitement in the room was palpable and it was justified as Gaultier is so entertaining (how many other designers can you think of who can hold a room in thrall as well as running their own label for nearly 40 years and heading the team at another top maison?). My favourite story that he told was when he was chatting with Andreja Pejic (in what was her first Melbourne appearance as a woman, apparently) about how people who are “different” are finally becoming more accepted. Gaultier was saying how he never fitted in at school as he was a lot more sensible (I think he meant “sensitive”, but it could go either way!) than the other boys who were into sport and typical “boy” things. He used to draw pictures of the women of the Folies Bergere and for some reason his teacher made fun of him for this and “punished” him by making him walk around with the pictures pinned to his back. But this proved to be his ticket to acceptance, because all the other boys loved the pictures (I’m guessing they were of semi-naked women!!) and asked him to draw for them. So, as Gaultier said, the moral is that if people are going to like you, they will like you for your real self. One wonders what would have happened if the teacher hadn’t punished him and had simply ignored him – but I’m sure that such a prodigious talent as his would have eventually found a way to shine. Here he is after signing the NGV director Tony Ellwood’s “Gaultier” stripy surfboard (I doubt that surboard will see many waves… in fact, I think it will go straight to the pool room).

I was in such a buzz after Gaultier’s talk that it was hard to take in the exhibition itself, but I get the feeling it would be hard to take in whatever your state of mind. It is overwhelmingly fantastic – there is not only a huge variety of designs (including haute couture, movie costumes and the famous pointy bra he made for Madonna) on display, there are also mannequins with extremely mobile faces who “talk”, making use of the latest technology. 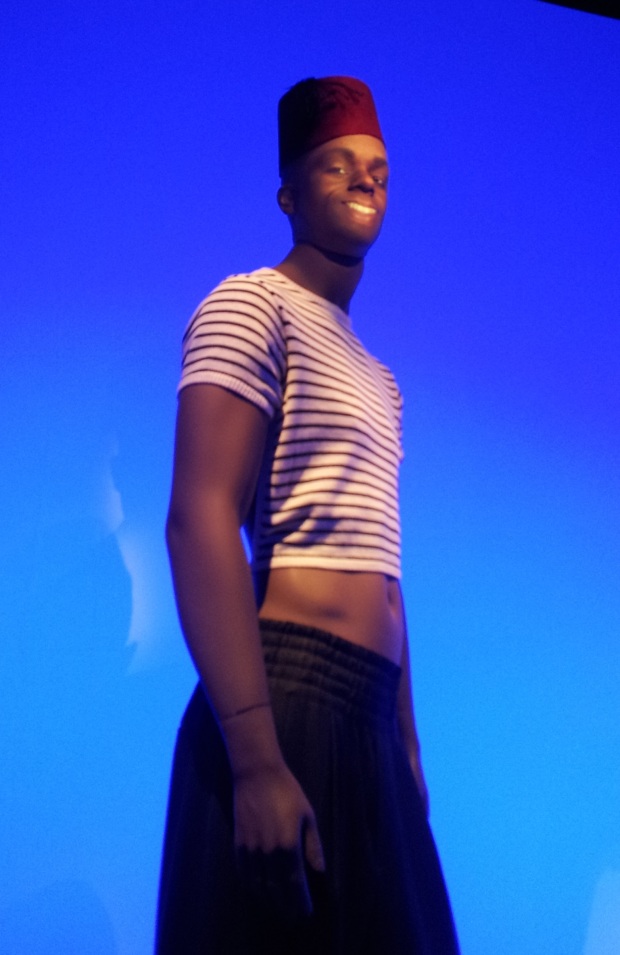 Goodness knows how the curators decided on what to display, given how huge the volume of Gaultier’s work must be since launching his label in 1976, but here is some of what they chose.

Check out this catwalk look!

Knitwits – the challenge is on. This outfit is completely knitted!

It’s a bit hard to tell, perhaps, but this mannequin’s headdress is basically a whole heap of mantilla combs stuck in to an updo at all angles. If only I had enough hair to even contemplate attempting this!

There were lots of looks with ethnic influences…

This was worn by Bjork (although kind of reminds me of a super-embroidered and embellished version of Kenny from South Park)!

Gaultier’s designs really give you wings…

Having travelled a fair bit through Laos, parts of this look were kind of familiar. Those huge necklaces and the silver studding!

And the matching massive bracelets… 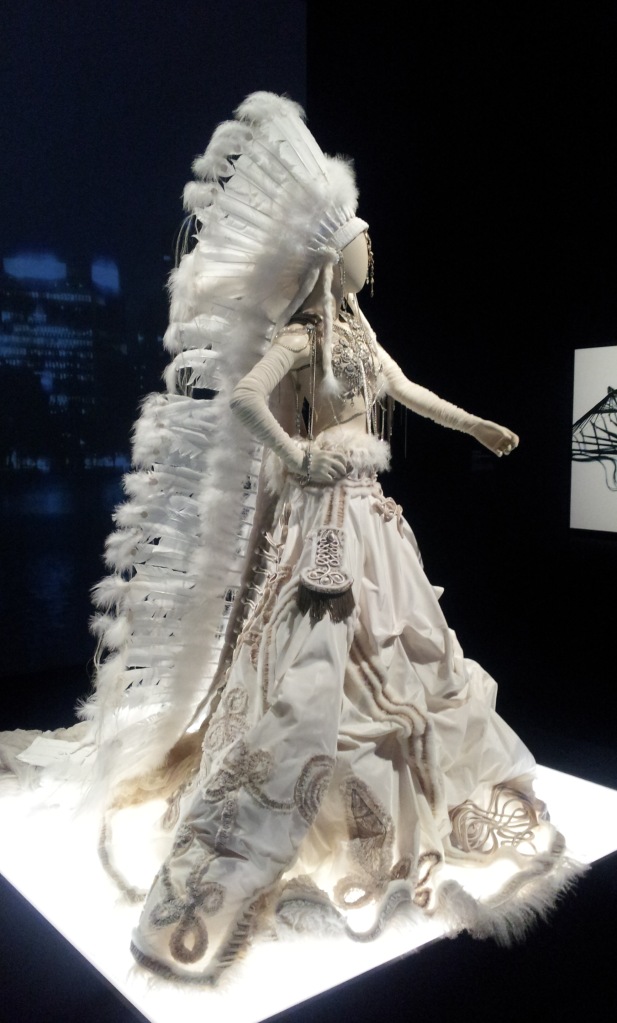 To do this exhibition justice, try to calm your mind before you go in, and allow about two hours at least – or go back multiple times. Even if you’re not a huge fashion fan, this is an exhibition that just about anyone can appreciate due to the diversity and level of creativity, plus the technology of the mannequins. I could go on and on raving about it, but it’s DEFINITELY better to just go and see it for yourself. JPG, we salute you!

← More straw! (A lesson in DIY millinery)
In the presence of sustainable fashion royalty →

5 thoughts on “Must-see mode: Jean Paul Gaultier at the NGV”