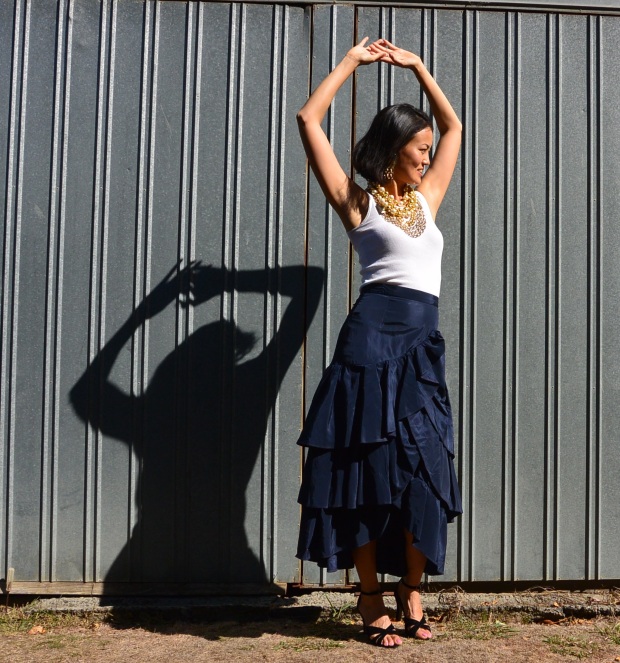 …well, nearly (anyone who knows me will be shocked at this photo as I never, like EVER, dance). Often I buy things that aren’t quite perfect and I have to make some alterations, which is what happened when I found this flamenco-style skirt at Lady Petrova‘s sample sale. From the front there was nothing wrong with it but it was way too small around the waist and was missing its back zip.

Normally I’d attempt to put a new zip in, but there wasn’t going to be enough fabric to meet at the centre back. So I ummed and aahed about buying it, but the clever girl at the register suggested that adding ribbon so it could be laced up like a bodice would take five minutes … and I was sold. Or rather, the skirt was sold, for $20. And it turned out that adding lacing really did only take about five minutes.

Why had I never thought of this before for a quick fix to replace a zip or buttons? All you do is place narrow ribbon along each side of the zip opening, stitch in a few places (at each end and at the same positions on both lengths of ribbon – marked by the pins in the photo) and lace a long ribbon through. I can’t even begin to count how many times I’ve passed up skirts and dresses because they’ve had broken zips and I thought they’d be too much of a hassle to replace. Then again, given the state of my bulging wardrobe, it’s probably lucky I didn’t know about this technique earlier!

I chose to position the lengths of ribbon for the lacing on the inside of the zipper opening but you could sew it to the outside if you want a different effect, with ribbon in a contrasting colour, for instance. I might use bright pink ribbon some time (not only is adding lacing fast, it’s also versatile as you can change the colour of the ribbon that you thread through! Win!) but I chose black for the moment.

Speaking of versatile, it turns out that this skirt doubles as a dress if I pull it up around my bust and tie the ribbon halterneck style. 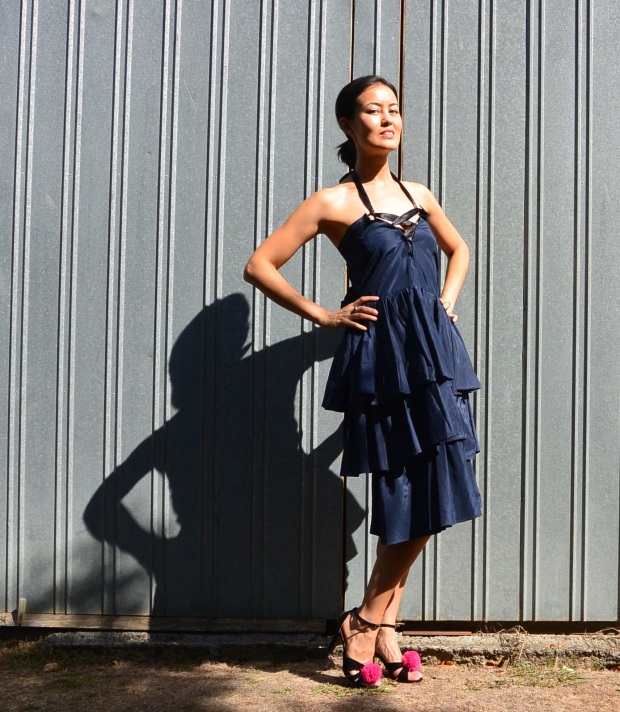 Or I can tie the ribbon at the front and make it into a strapless dress!

Even though the ruffles and semi-shiny fabric make this skirt seem a bit fancy, the navy colour means it lends itself to all kinds of looks and pairs well with all kinds of patterns, including my favourite batiks and ikats.

$20 well spent, wouldn’t you say? I not only scored a new skirt, but added a super easy, super useful technique to my DIY arsenal. And that’s definitely something to dance about!