Shorts for all seasons

Have you heard the expression “aspirational fashion”? It’s used to refer to ridiculously glamorous and expensive fashion which the admirer would never wear in real life, due to their social and/or financial circumstances. In my case, though, it is embodied in something like this kaftan that I bought this one for $3 from an opshop. (Photo thanks to Busichic)

I had visions of wearing it to stroll the streets of some warm, exotic locale or to loll about reading while idly nibbling on grapes on a summer holiday. In other words, I was aspiring to lead a glamorous, laidback life (if only for a few days in summer).

But two years have passed and have I ever worn it? No. It turns out that although the length and style would suit a tropical destination where a modicum of modesty is required, the fabric itself is not particularly cool to wear. And more to the point, I haven’t travelled anywhere that requires resort-style dressing and am unlikely to in the near future. However, I am likely to go to a beach in Melbourne again some time, and at mini-length, this is the perfect cover-up. I won’t be needing it any time soon as we’re heading into winter, but once it starts warming up again, I’ll be ready!

This was a speedy makeover as all I did was chop off fabric from mid-thigh level and hem the remaining tunic. But despite appearances, I didn’t just lounge around after that… 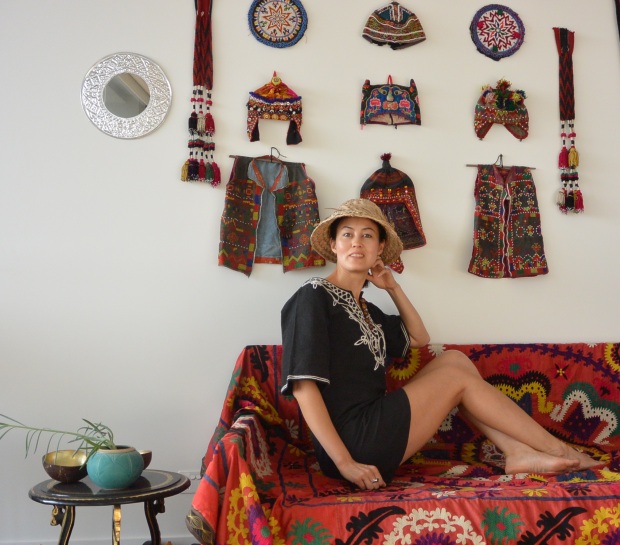 …because after all, there was this much fabric left over. More than enough to make something else.

So I hunted through my pattern collection for a super-simple shorts pattern and set to work. This one only requires two pattern pieces (ie one for each leg – there are no side seams which is great when you’re trying not to sew into embellishment such as the embroidery on this kaftan) and is intended for making pyjama shorts with an elastic waist (there’s a similar pattern online here if you’re interested).

Of course it would have been more obvious to make a skirt out of this fabric but I already have several printed, patterned or otherwise embellished skirts, and having seen some fabulous culottes recently, I thought I could do with a change. Rather than following the original pattern and using elastic at the waist, though, I made tucks around the waistline for a more tailored look and put in a zip at the centre back seam.

What do you think, did I do OK?

They don’t look too bad paired back with their original top half, do they? I suppose you could call it the djellaba version of double denim.

This reworking made the kaftan so much more versatile – I can wear the tunic by itself to the beach or for casual city strolls in the summer, or tuck it in to the shorts for a tidier look. And the shorts work for all seasons, depending how they’re styled.

Ridiculously glamorous and relaxed? Maybe not. But for $3, I don’t really mind!

← Exquisite Threads at the NGV
For style that’s evergreen… →