Exquisite Threads at the NGV

If you love embroidery, put your hands in the air and say yeah! 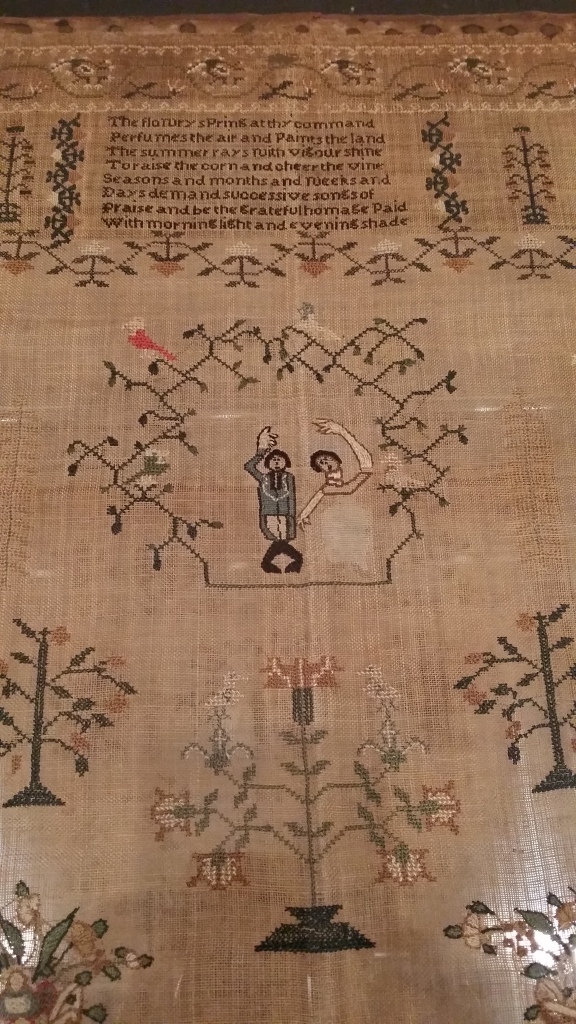 I’d have my hands in the air just like this little couple but it makes it a bit tricky to type, and that would mean I couldn’t tell you about Exquisite Threads, the NGV‘s first exhibition that focuses on embroidery. It only opened last week, and there was a floor talk on Saturday so I decided to check it out. As did just about every lady over the age of 60 in Melbourne. The NGV staff member who introduced the event said in all her 20 years working there, this was the biggest crowd she’d ever seen at a floor talk. Embroidery obviously rocks. This was not just any old scrappy stitching though, the pieces include this sampler by Norman Hartnell which was for Queen Elizabeth II’s coronation gown (which is why it features flowers from her various Commonwealth countries such as the Australian wattle).

This writing box has some kind of biblical scene on it which I think was “Rebecca at the well”. Being the heathen that I am, I’m not familiar with the story, but curator Paola di Trocchio said during the talk that the lady who embroidered it would have thought about its moral significance every time she used the writing box. She would also have had plenty of time to reflect on it while she made it, as apparently it would have taken years (I suppose she was just using an old cardboard cat food box to store her pens in the meantime?) – and it then took years for the cabinet maker to put it together. Maybe I should embroider a laptop case with inspiring scenes on How To Get Things Done? Then again, I do a fair bit of reflecting on that already, not that anything comes of it.

Some of the pieces in the exhibition date from so far back that it was before the alphabet had a “J” and a “U”, like this piece from 1692.

This apron is from a little bit later, but is still very old for a textile in such good condition (although the blackish bits were actually once gold – the metallic thread has oxidised). It’s hardly what we would think of as an apron – Paola explained it well by saying that the more decoration an apron had, the less work the wearer would have done, and this one was obviously worn by the lady of the house who didn’t do a great deal of housework. There’s a video you can watch at the exhibition that explains a bit about the conservation process. Imagine how nerve wracking it would be to be put in charge of this piece’s conservation!

Or how anxious you’d get if you were asked to create something like this Regency era gown.

Not exactly the kind of thing you can just casually work on while sitting in front of the TV and dipping into a bag of popcorn! I think I’d be scared even to breathe in case I somehow stained the fabric.

It’s hard to believe that some of the work in the exhibition was by children as young as seven years old (or six, if they were “in the 7th year of their age”?).

Yep, while I was making vaguely-humanoid dolls out of pipe cleaners and safety-pinning scraps of ribbon to my teddy bears in a faint semblance of fashion, Sarah Burch was dwelling on morbid topics such as rapidly withering youth and stitching this insanely intricate sampler (or as she spells it, “famplar” – did you know “f” was once used as “s”, although it looks like this was not the case all the time). I suppose if your marriage (and consequently, life) depended on your skill at embroidery, as it did back in 1778, you’d want to be good at it. Hmm, maybe my pipe cleaner dolls explain my lack of success in that department. But let’s not think about that right now. There’s more mad skillz to be seen, such as in this uniform jacket…

…or this “burnous” (basically a very fancy cape) made by Liberty of London.

One of the ladies watching the embroidery demonstration following the talk asked why there were some unfinished items in the exhibition, like this one.

I thought the answer was pretty obvious, as did the lady demonstrating, as she replied that people got busy doing other things, or got sick of the project, or died. (In my own case, it’s the first two reasons, but I can imagine whoever has to take care of my affairs once I leave this world will be tearing their hair out at all my UFOs – that’s Unfinished Objects in case you didn’t know.)

Fortunately most of the objects in the exhibition actually are finished, although I wonder how much use they got as they are mainly all in excellent condition. I think this was a bedspread (I’ve forgotten) but obviously its owners did not have a cat.

This sweet little coif is embellished to within an inch of its life. Obviously it was very well made or its wearer was careful with it (or the conservator did an excellent job) as there is practically no evidence of wear and tear. I found it interesting that back when this type of headwear was in fashion (around the early 1700s, from memory), wearing a head covering was seen as a health necessity as much as for modesty. I wonder what they thought would happen if they went around with bare heads? And I wonder if my own (pretty fine already) health would suddenly improve if I started wearing hats all the time?

Gloves were also a necessity back then, although I think these men’s gloves were more for show than for function.

It’s interesting that men’s garments were embroidered almost as lavishly as women’s. Poor men haven’t really had much of a chance to sport colour, pattern and embellishment for the past few centuries, have they? Maybe with the hipster movement embroidery will make a comeback – after all, it’s made by hand and takes AGES so it’s the ultimate in slow fashion. Never say never!

4 thoughts on “Exquisite Threads at the NGV”