We all have a happy place. For Audrey Hepburn (as Holly Golightly, anyway) it was Tiffany’s. For me, it’s the NGV. It’s impossible to feel bad surrounded by creativity – and by other people enjoying that creativity. But yesterday the happiness factor got boosted by about a zillion because of this.

A selection of works from The Dominique Sirop Collection National Gallery of Victoria, Melbourne Purchased with funds donated by Mrs Krystyna Campbell-Pretty in memory of Mr Harold Campbell-Pretty, 2015 Photo courtesy of NGV

You may have already read about this or seen it on the news – the NGV has been able to purchase a collection of 130 garments and thousands of pieces of archival materials such as fashion sketches, magazines and designers’ notebooks, thanks to funds donated by this lady: Mrs Krystyna Campbell-Pretty.

The collection was bought for $1.4 million and was originally the property of Dominique Sirop, a French couturier who started collecting at age 14. (Think about that for a minute. What do boys of 14 usually collect? It’s probably not anything you’d want to put on display at an art gallery! Mr Sirop was obviously very special from a very young age!)

I was there for the media announcement yesterday morning and felt so, so lucky – we walked past this impressive work into the next hall and suddenly it was like Christmas (well, the Christmas of my dreams): beautiful couture garments arrayed in front of paintings from the 19th and 20th centuries.

Chanel dress from 1919 – apparently labelled Gabrielle Chanel, which means it is from before she changed her label to “Chanel”.

I’ve never heard of this magazine, Chiffons, but it sounds very refined and elegant. A lot more so than the contemporary version, which would have to be called something depressing like Polarfleeces or Lycras. 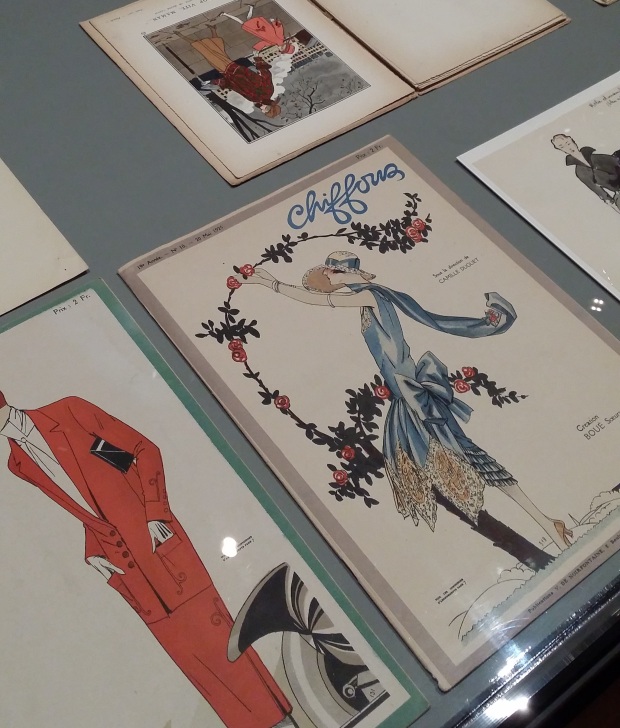 The sneak preview that we got yesterday was by no means the entire collection – senior curator of fashion and textiles Katie Somerville said that the custom-made crates carrying this precious cargo only arrived from Paris last week, so this was just a small selection. There is an exhibition planned, of course, but not until 2018 (!) and it’s unlikely that it will be staged as it was yesterday among the other artworks. So I felt extremely privileged to have been among the relatively few who were able to view these pieces of fashion history against such a beautiful backdrop. It was a very, very happy place indeed.

One thought on “Haute couture for humpday”