The concept of “holiday dressing” these days conjures up beautiful Instagram flat lays of carefully chosen designer pieces that evoke the spirit of the travel destination: photogenic bikinis, straw hats and sarongs for beach holidays or fedoras, artfully ripped denim and leather satchels for urban stays. But to me – at least when I was thinking about this post – it calls to mind clothing that fitted perfectly into the exotic locale but, once back in the rat race, looks ridiculously out of place. These batik pants (kind of a version of fishermen’s pants) perhaps are the embodiment of “holiday dressing”. 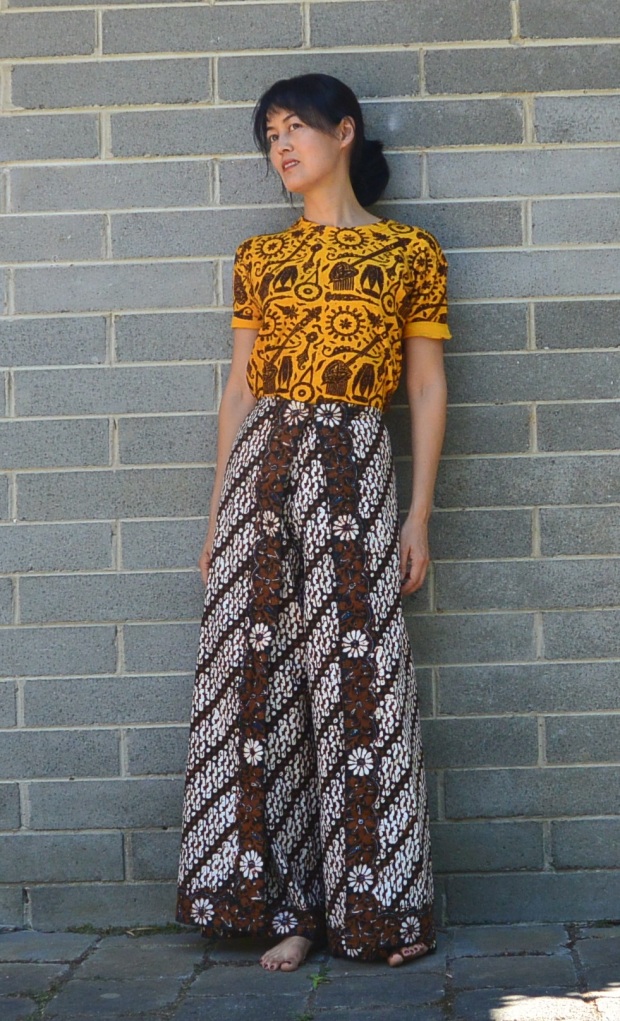 I didn’t buy them on holiday though, I bought them for a holiday. They were at an opshop for $5 just before I went on my South-East Asian odyssey last year and I thought they would be handy (because of course I didn’t already have enough batik in my life*…). It’s my guess that someone bought them in Indonesia quite a while ago and then didn’t wear them back in Melbourne, so off to the opshop they went. Their loss is my gain! Although fishermen’s pants are ubiquitous throughout South-East Asia and I’ve been many times, I had never actually tried any on, so was interested in their construction.

They are made from two pieces of fabric which are only joined at the crotch. The waist is elasticised and has hook-and-eye fastenings at each end. This means they are basically one-size-fits-all which is I suppose why they are sold at so many tourist spots. To wear them, you step over the crotch, wrap the front part around your waist and hook it at the back…

… and then bring the ends of the waist from the back section to the front and hook them in place (or you can reverse the wrapping order if you’re feeling rebellious). There are no side seams, obviously, but all that overlapping means that unless there’s a gale force wind, your legs will be kept modestly covered. The elastic waist and mass of fabric, though, doesn’t really allow for a flattering shape, and wearing them in Laos, I discovered that all that overlapping means you get very HOT (I mean dripping with sweat, rather than looking sexy. I don’t think fishermen’s pants were invented for looking sexy. But I digress.) Anyway, what I’m trying to say is that they are actually not as practical as I was imagining they would be, although I did open them out and use them as a sheet/cover up a few times while travelling (I always try to make my clothes multi-task when I travel… it’s a sheet! it’s a scarf! now it’s pants!).

Back in Melbourne, though, I decided to turn them into something more flattering and perhaps less stifling. Being a bit of a batik fan, I had been happy to read the label when I bought the pants as it indicated these were real batik and not just a print…

… but not being an expert I couldn’t tell. I was therefore pleasantly surprised after unpicking the seams to find the edge of the fabric looks like this:

… which indicates the fabric was hemmed and then put through the batik process of the design being drawn on in wax and being dyed in various shades. Obviously the dye didn’t all get into the tightly rolled edge which is why you can see the blue and brown dyes which would have been used before the final black dye. (If the fabric had only been printed, then the edges would be a uniform colour.) Kind of exciting for a would-be batik geek!

This shows what one side of the pants looked like following unpicking and removing the waist elastic:

I seriously considered making a kaftan as the neckline was already cut out (ie the crotch section) and also toyed with the idea of making a dress that reverts back into pants (surely this could work with lots of velcro or press studs?) but took the less time-consuming option of making a long skirt instead because long, swishy skirts make me feel princess-y and I was in need of feeling a bit fancy. 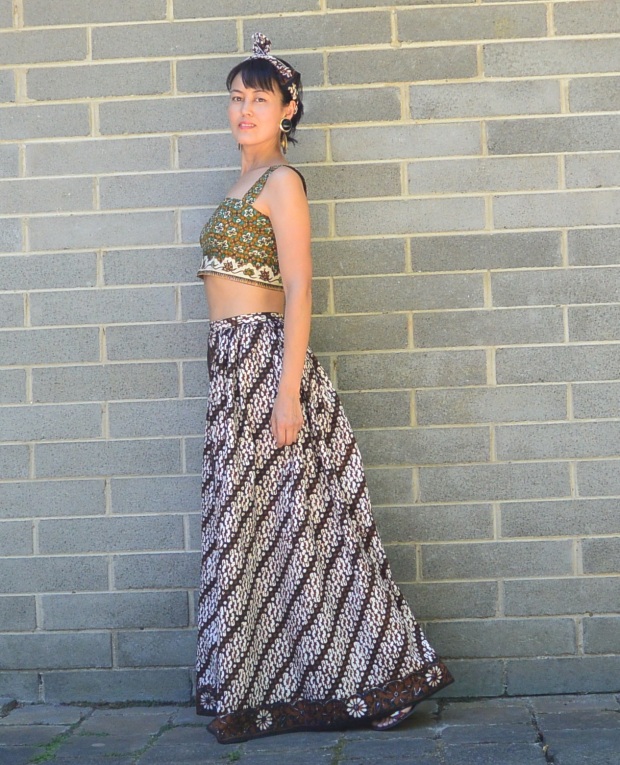 To do this, I sewed the two pieces of fabric together with the patterned edge down the front, put a zip in the centre back and made gathering stitches around the waist. This meant first folding each piece of fabric in half like so:

… and then trimming off the excess (ie the crotchy bit on the left below) to form a slightly curved side seam (which you can see on the right below). I left the centre front split up to a bit above the knee to make the skirt easier to walk in and also for better ventilation! 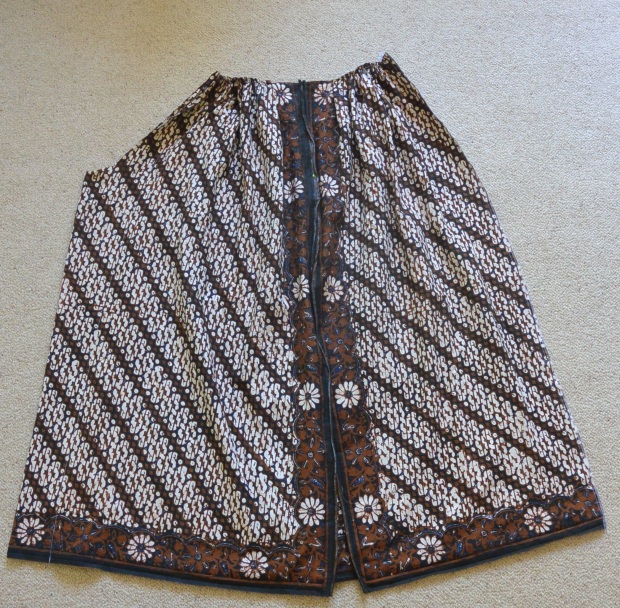 I then just added a waistband (made from one of the crotchy bits) and the skirt was finished – much cooler (temperature-wise) than pants, and more city-friendly too.

I do love more of an ethnic look sometimes, though! And apart from feeling princess-y, it’s also nice to feel like you’re on holiday, which batik always does for me, hence this look. The headband is made from the other crotchy strip taken from the pants, so I had hardly any waste material. The bustier top is made from scraps left over from this project.

I’ve been having to wear long skirts and pants recently as I fell over while running a few weeks ago and made a massive, unsightly hole in my knee, so this skirt will help me feel a bit more glamorous while I grow the flesh back!

*The yellow and brown batik-print T-shirt I’m wearing in this photo is from Phillips and was $5. They’re having another sale this week!

← Monday musing: is KonMari for creatives?
Haute couture for humpday →

3 thoughts on “Holiday dressing at home”