Textiles and other treasures from my travels

Well, it’s been a while, hasn’t it? Somehow nearly a year has passed since I posted on this blog. I blame Instagram… I mean, does anyone even read blogs any more? If you’re reading this, I suppose they do!

Regular readers will realise that this post is a bit out of the ordinary as it doesn’t involve me making stuff out of crap (well, OK, there is ONE DIY in this post… I couldn’t resist!), but rather is a bit of a show-off session about my solo trip through Santa Fe (in New Mexico, US), Mexico and Guatemala over a month in July-August. (There are travel scenery shots on my Instagram, but for those of you who love a good rummage through textiles and accessories, read on! If you’d prefer to see a video with me rambling on about these things, visit here.)

First stop on my itinerary was the International Folk Art Market in Santa Fe, and I had such a great time there that I haven’t stopped banging on about it and Santa Fe itself to anyone who will listen.

IFAM is a weekend event that brings together artisans from all over the world, displaying and selling their wares. It starts with a Friday evening gala which offers super keen visitors a first look at ALL THE THINGS as well as yummy international eats and entertainment. I was lucky enough to go to the market on both the Friday evening and Saturday morning (thanks, Tourism Santa Fe!) and picked up these beaded glasses from ZuluGal Retro, a social enterprise based in Durban, South Africa. (If you like them, let me know as I’ve just ordered a batch to sell in Melbourne soon – stay tuned for updates!)

Santa Fe is like heaven on earth for lovers of vintage, especially turquoise and silver Native American and Mexican jewellery (hardly surprising, given its proximity to Mexico). I significantly added to my jewellery collection, mainly via two trips to the Sunday morning Antique and Tribal Arts Market at the DeVargas Center and a morning at the Whitehawk Antique Indian and Ethnographic Art Show.

(The photos that the items are resting on are from one of my favourite books, Ethnic Dress by Frances Kennett. I was lucky enough to pick it up at a library sale for about $1 and often look through it when I’m in need of inspiration or just feeling flat.) 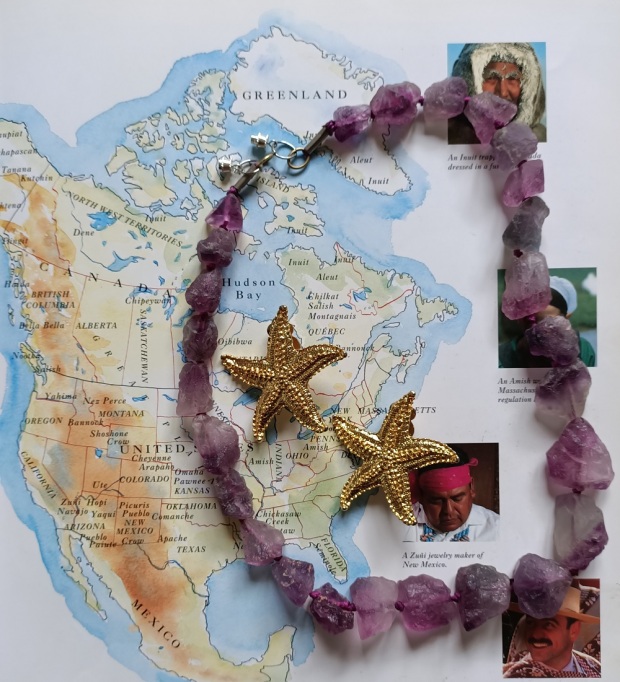 Apart from buying proper jewellery, I also found a few more costume-like pieces at Double Take, a vintage and Western boutique that I am still dreaming about. It has a large op shop style section which is where I found these starfish earrings and amethyst necklace for a few dollars (admittedly, $US, which made them more than I would have considered paying in Australia, but hey, what are holidays for if not to forget about your budget?).

I also found this belt for $1, which had dangly bits that had broken off, making it a prime candidate for a remake. You can see what I did to it here.

And for the huge sum of $3 I found this brooch, which I knew must be Japanese, but I couldn’t place it. Was it a school badge or something like that? I felt that I’d seen it but wasn’t sure where. 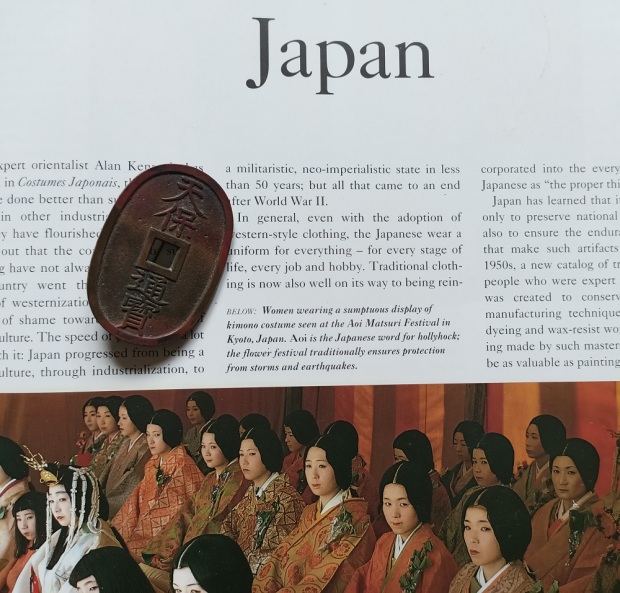 After a bit of research (ie messaging my Japanese friend and faffing around on the internet) it turns out it’s an old coin called a Tenpo Tsuho and could be worth anything from $4 to nearly $3000. I’ll let you know when I get it valued!

Next stop was Mexico City, where I did surprisingly little shopping (not from lack of trying!). My best finds were at Lagunilla flea market, where I stumbled on a stall selling traditional dress from all over Mexico as well as other Central American countries. With the help of a fellow fossicker whose Spanish was much better than mine, I found out that the pieces had belonged to a collector who had recently died, and the stallholder was selling them for the family (or something like that). From the massive pile of embroidered, beaded and otherwise embellished pieces, I chose the blouse and the huipil below.

This blouse is completely hand sewn and is apparently from somewhere in Mexico. I’d never seen anything with scalloped tucks like this, so even though it’s not really my style, I decided to take it home with me. Look at how the little buttons are made from bits of material… 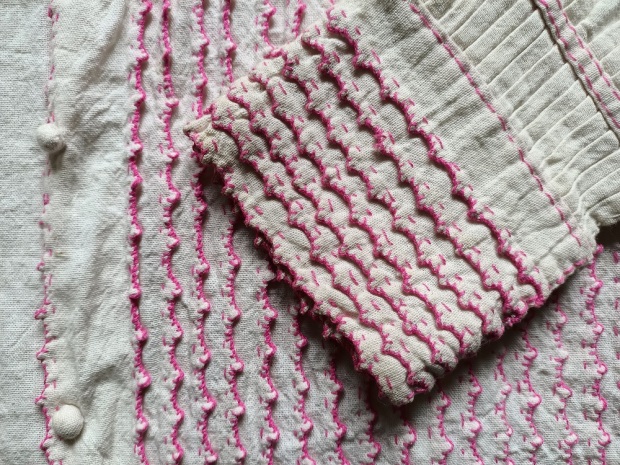 This huipil is not Mexican, but Guatemalan, and as far as I can tell is from San Mateo Ixtatan. 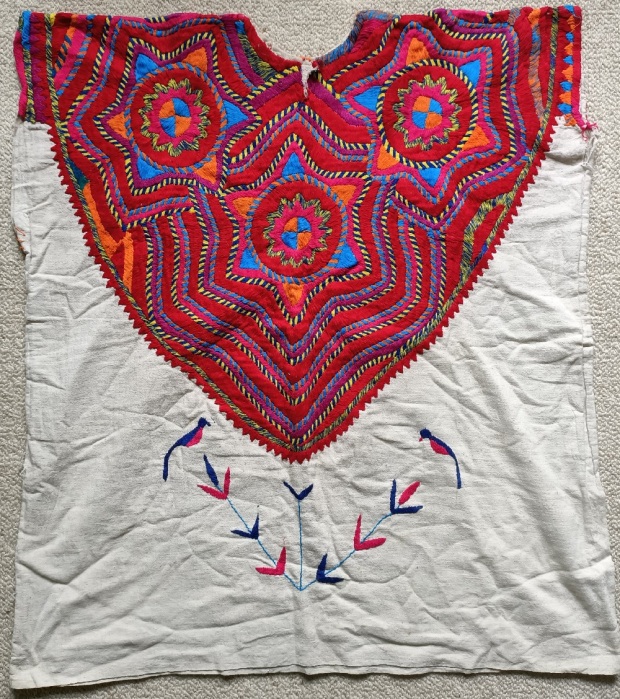 The embroidery is extremely thick, which makes the piece quite heavy (why couldn’t I love delicate chiffon-weight textiles instead of the dense, weighty pieces like this!? It would make travelling so much easier!). But look at those colours! 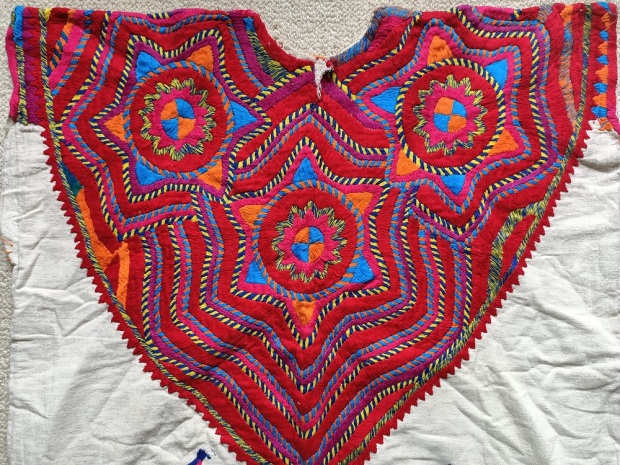 At a market in Coyoacan (near the Frida Kahlo museum) I found traditionally made shoes and a kitschy but cute leather bag that I will unfortunately probably never use because it’s so small. The huipil that I’ve placed them on for the photo was bought in Guatemala but I think it is actually Mexican in origin. Can’t you just imagine Frida herself wearing all these things?

(The sandals on the right are actually from Oaxaca but I’m sure you’d find a similar style in Mexico City if you went looking.) 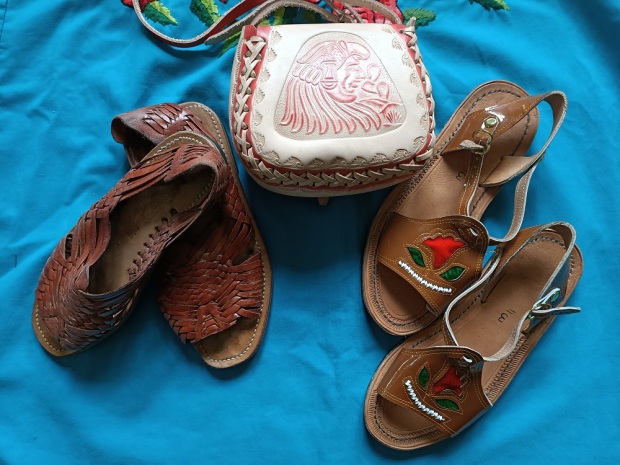 While staying in Antigua, Guatemala, I took a two hour bus ride to the market at Chichicastenango which is fabulous, but also massive and overwhelming (and one of the churches around which it is centred happens to be in this photo from the Ethnic Dress book). I’d expected to come back loaded down with textiles but all I got was this jade necklace. 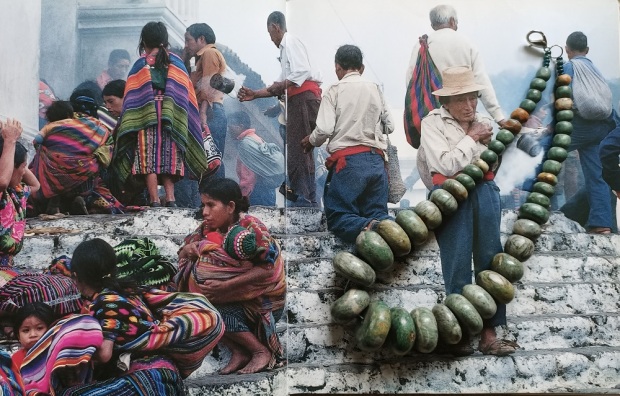 The reason I didn’t buy much at Chichicastenango was that the day before in Antigua, I’d found Nim Pot, a huge warehouse with all kinds of handicrafts from all over Guatemala. As much as I love open air markets, it was just so much easier to shop at Nim Pot because there was no one hassling me, I wasn’t getting fried by the sun or drowned in a downpour (both possible on any given day at that time of year), there was extremely minimal threat of pickpockets and I knew that the prices were reasonable. Plus, it was open late and within walking distance of my accommodation. Winning! Needless to say, I spent *considerable* time there sifting through the mountain of huipil in less than perfect condition whose average price was about $15 AUD. (FYI, Nim Pot also has huipil in near-new condition, categorised by region, ranging from about $50 up, for those of you who prefer not to have to wash, repair or alter garments.)

This one appears to be from Joyabaj, and has dense embroidery around the neck and on the sleeves. 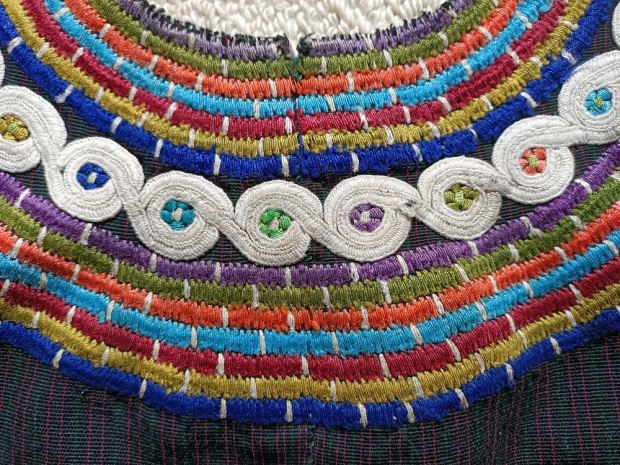 This blue one is a mystery, as it was the only one of its kind and I can’t find anything resembling it by searching online.

The hole for the head is tiny so maybe it was for a child? The yoke section seems to be woven rather than embroidered, and is made up of subtly different shades of blue, indigo and green. 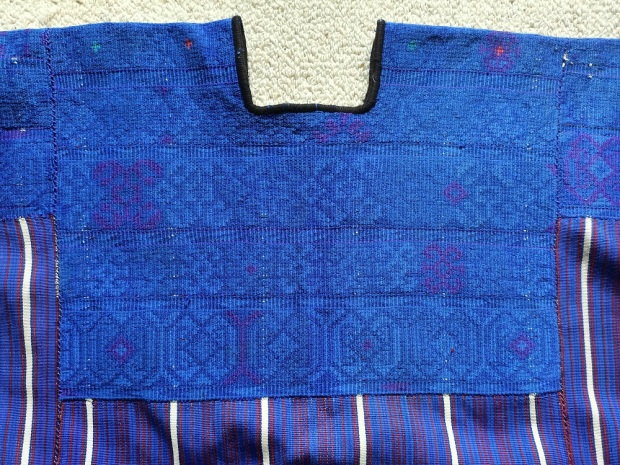 The most puzzling thing about this piece is that it has a patch in exactly the same spot on the front and back. I can’t imagine what would have caused this but it adds character!

I did also buy one piece at Nim Pot that was new rather than secondhand – this belt with an elaborately woven section that is displayed at the front and fabulous tassels.

If you’ve got this far, you obviously love traditional clothing and textiles as much as I do. If you haven’t already been, I highly recommend a trip to IFAM and to Central America – I know I’ll go back someday with a big budget and an even bigger suitcase!

2 thoughts on “Textiles and other treasures from my travels”