Entering the realms of the tech-savvy

I finally found a place in my house where the light is flattering and for some reason makes me look like I’m in an art gallery or somewhere slightly trendy. Of course, the space is about 50 square centimetres in total, which makes for somewhat cramped conditions and means I can’t do full length shots, but seeing as I only yesterday worked out how to crop photos on my computer (and that was by accident) I’m sure this problem will work itself out. Now if only I could work out how to actually make text and photos go where I want them to on this blog, I’d be happy. Anyway, now that I’ve found this space and got slightly more tech savvy (very, very slightly) I’m going to start putting up shots of my remade garments, which probably

make up about 70% of my wardrobe, although a lot have really only had hems altered, which doesn’t really count if you ask me. This singlet is just a normal Bonds tightie whitie, but I’ve sewn on a big patch of embroidery from a kimono (or probably an obi, but I did it something like 8 years ago, so I don’t remember exactly). Of course when I did it, I didn’t think about washing the singlet, and then the dye went everywhere because kimono fabric is not meant to be washed, but I kind of like the faded look and the random dye all over the singlet because I like things to look worn in. Well, some things anyway. Not underwear. But you get my drift. 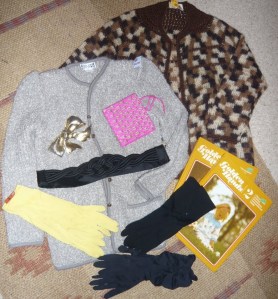 a mottled brown cardigan (that is either hideous or hippy-chic, I’m yet to decide), old-lady grey woolly jacket with shoulder pads, evening gloves, a little pursey thing (I find pursey things hard to resist), a cummerbund belt, a very heavy metal belt buckle in the shape of a bow which I’m yet to work out what to do with, and some lovely Golden Hands books which are something akin to the Bible to me. I’ll do a separate post about the gloves later, but I thought I’d show you what a bit of nipping and tucking can do for a grandma garment (ie the grey jacket). Of course, foolishly, I did not take a “before” photo, but you can trust me when I say the jacket really did not look the greatest before I took a needle and thread to it and turned what was essentially a cardigan with shoulder pads into a fitted jacket with (fake) lapels. Now it looks like this, which I hope you would agree is a l 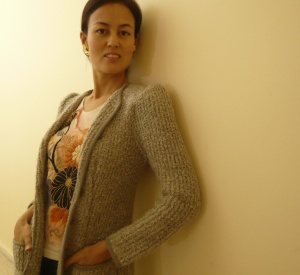 ot better. I don’t think I look like a grandma, at least. Maybe a very young grandma who likes to stand around in her own hallway taking self-portraits instead of baking cookies and knitting bedsocks?

3 thoughts on “Entering the realms of the tech-savvy”