It’s cocktail hour, but I don’t drink, and I’m at home slaving away at my translation anyway, or I would be if I weren’t writing a blog post. Woops! Anyway, for those of you lucky enough to be living it up out on the town, here’s something you might like to wear… I made this ages ago out of an obi but didn’t have a picture of it until now. It’s very short 1) because I like mini-things and 2) because I had made another skirt and a dress to begin with and this little number was made from the leftover parts. Funnily enough, looking at the skirt that I made first, it looks the same length as the mini one that I’ve got on, but that’s just because the model’s legs are so long!
I used bits of other kimono as well for the dress to make the ruffles on the side and the skirt part – it’s the bodice that was originally the main section of the obi.
When I was looking for the pictures I found some others from the shoot –

yes, I actually got the lovely Gen Kay to shoot a few of my pieces while I was still living in Tokyo. Here’s Gen snapping Rie around the corn

er from Nicole’s apartment – Nicole lent us her lounge room so Rie, the model, could change.
I love this shot of Nicole being a bit bossy and telling us where to shoot. She’s in her Yves Saint Laurent cape and carrying her Prada bag just scouting locations around the ne 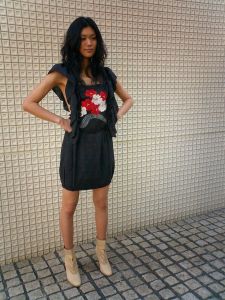 ighbourhood…. such a fashionista and the only person I know who has worn a YSL cape to go mountain climbing. Gen, Nicole and I used to hang out all the time in Tokyo when Gen was over for work… in fact I think I saw her more there than I do even though we’re both living in Melbou

← Yay for yukata
Bagging a bargain →