Fashion on film, way up high

Who else out there is a freelancer? Do you also have those times when you’re practically twiddling your thumbs, and then you’re so busy that every waking moment is consumed by work? I’m going through the latter right now, which is going to make it hard to get to fashion week events next week. So here’s some pics of something I went to last week instead (last Thursday, in fact. Agggh. So behind!!). It was a collection of short fashion films and was held at Rooftop Cinema. Have you been? It looks like this.

Such a lovely setting with the city lights all around, and I’d made sure to rug up in my new (op-shopped, of course) pink skirt which is like wearing a blanket, because my feet are like iceblocks if the mercury drops below about 25 degrees (that’s Celsius, people). I had to take this shot at home because it was too dark on the rooftop. All the stuff I’m wearing on my top half is Me-Made or at least Me-Mucked-Around-With (earrings, Akha jacket and grey long sleeved T-shirt) and the skirt and bag are from op shops (I started putting links to all of these but it was taking too long… so let me know if you want to know more about anything I’ve got on!)

There were short films first including an interview with Catherine Baba and Diane Pernet, who is lovely and very entertaining whenever I ran into her (she got searched at the airport on the way in to New Zealand fashion week when we were there a few years ago, and was forced to remove her mantilla… she said all the hair pins she uses to keep it on set off the metal detectors!!)…

The drawcard film was Corinne Day Diary which was of course fascinating – have you seen it? I found it hard to understand a lot of her work but she tells it like it is and obviously is committed and passionate about what she does. Here are some of the shots from the film, don’t these pictures of a young Kate Moss bring back memories? 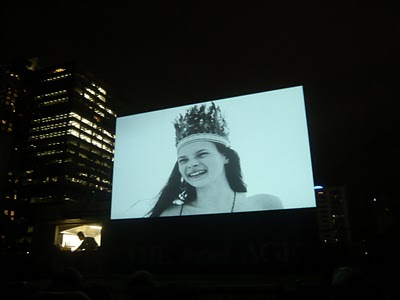 This last shot is of Corinne herself as a child, she was a model too before she became a photographer. She and Kate weren’t so dissimilar, in my opinion!

There was also a very cool short film by my friend Gen! And if you’re wondering who the guy is down on the left, he’s very important, as he is the one responsible for creating the yummy hamburgers, fries, and icecream sandwiches to nibble on during the films! 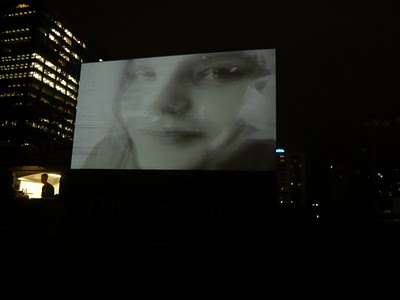 Speaking of rooftops… the earthquake in Japan really had me worried about all my friends in Tokyo, but it turns out they are all OK, apart from cracks in walls and that sort of thing. All the girls in the Vogue office had to stay the night there from what I can gather, as no public transport was running. But seeing as they often end up doing all-nighters, it probably wasn’t too much out of the ordinary for them. Strangely I had just been telling a friend at dinner on Friday that earthquakes happen all the time there and we just got used to them and usually they were not a problem… and then I came back home and turned on SBS…

6 thoughts on “Fashion on film, way up high”