Reddy to take on the world

When work makes you feel like this, you know it’s time to get some colour back into your life (yes, more gratuitous use of cute cat pics to illustrate a tenuous link to the rest of this post, but who doesn’t like a cute cat pic on a Sunday night!?).

I recently posted about a denim skirt that I got at Camberwell market in a scoop of dead stock bargains (and no, I still haven’t had time to dye it, aggh!). I also found these brilliantly red pants, which required no dyeing, but a fair bit of altering. I don’t think I have to explain why. Here are the extremely glamorous “before” pics!

Possibly some of the least flattering pants I have ever seen when it comes to the rear view. These were probably from the late 60s or so, as they had a side zip, made of metal, and the longest crotch measurement it would be possible to have in a pair of pants without them having to be recategorised as overalls.

As you can guess, a little bit of magic was called for to turn these into something I would actually wear in public. I removed the waistband and took off about 10cm depth from the waist! (What was that quote in Kath and Kim about needing to wear jeans with a 12-inch crotch?! Does anyone remember that episode? There’s a pic of similar jeans plus a handy Australian English pronunciation guide for my overseas readers here… or here, for posh peeps. I’m fairly sure I can predict which of you are going to head over there right now and try these expressions on unwitting husbands!!)

It was tricky to make a new, decent waistband, and I decided I was unlikely to wear them with the waistband exposed anyway (due to the fact that I’m not keen on the leggings as pants look, and these are verging on that) so didn’t bother making the waist look too decent.

I ended up just attaching elastic on the inside of the waistband instead. I’ll have to wear something long over them to cover my laziness but that’s OK. I also took them in at the sides for a better fit.

Not bad for $5, hey? And now I have something more interesting than jeans to wear with this jacket that I made last year! Injecting some colour into your wardrobe definitely boosts your mood – give it a try when work’s getting you down! 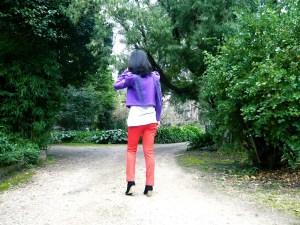 ← Dread-ful accessories
Serpent and the Swan →

9 thoughts on “Reddy to take on the world”