How’s the weather in your neck of the woods? Here in Melbourne it’s been particularly Melbourne-y, sunny and promising one minute and pouring with icy horizontal rain the next – which meant it was the perfect weekend for crafting (AKA making stuff out of crap) with a cup of tea and some like-minded ladies in a super-cute studio (more about that in a post later this week).
Here’s what I managed to make.

Actually, the pair in the middle are the only ones I made this weekend, and they only took a few minutes to put together. The pink parts are clip-on earrings and the dangly bits are papier mache beads which I made ages ago from newspaper and painted red. I intend to experiment a lot more with papier mache as it’s basically free to make and very lightweight even though it looks so chunky. If these dangly bits were real stones or clay then my earlobes would be dragging on the ground by now! Total cost of this pair – maybe $1? I’m not counting the cost of the many hours I spent covered in flour and bits of soggy newspaper trying to make papier mache…

The gold and blue earrings on the left are a mix of two different pairs – the top gold part are basic clip-ons and the dangly blue balls (stop sniggering) are from a pair of pierced earrings which I can’t wear thanks to being too wussy to get holes in my ears. Total cost – about $2 (the clip-on bits were a present from my sister so I only had to buy the dangly blue balls (cut the sniggering out now!)).

The gold earrings on the right used to look like this and they were $2.

I wasn’t keen on the 80s smiley faces and black beads, so I removed them and replaced them with turquoise beads (the result of many happy but guilty hours combing eBay for turquoise after checking out Iris Apfel’s jewellery collection!) which cost something like $5 for 60 beads, so, um, these earrings cost about $3 or so??

I also made this necklace. Well, when I say made, I mean “attached dangly bits”. 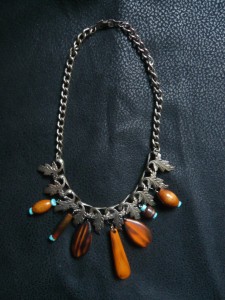 I bought the necklace at a market a while ago for about $5 and attached random wooden, resin and stone (turquoise? real or fake?) beads. Goodness knows where most of them came from, I have been collecting stuff for as long as I can remember. I do know where the middle three came from though, because my dad made them.

He used to be a colour matcher at a plastics/lino company and made these about 40 years ago (!!) as a way of filling in time when things were a bit quiet (thank goodness there was no Facebook back then or these wouldn’t exist!). He carved the wood, burnt it a bit, then mixed some pigment into some varnish to paint them and made hair clips and beads from them. He used the same technique to paint some bookends which hold some of my ridiculously extensive collection of sewing patterns. I found the beads in a box in the garage when I was cleaning up a few years ago – no one in my family throws things out which is why I’m expecting the crew from Hoarders to drop by at any minute, but also the reason that I can sometimes stumble on happy discoveries like this!