What a maharani wears on her day off

It’s a good question, don’t you think? What DO exotic royal ladies wear and what do they get up to when they’re not ruling kingdoms? In the nation over which I rule (that would be my imagi-nation!), it’s something like this.

In the rather crowded kingdom that is my imagi-nation, vast swathes of space are devoted to scheming up fashion, jewellery and how to give traditional dress from various countries contemporary style. When I found this book at the library, my immediate reaction was “ALL THE SHINY THINGS” and I borrowed it to inspire my jewellery designs.

How could images such as these fail to inspire? So much colour and adornment on every part of the body! And these people are not even royals, they are just everyday villagers going about their business!

As I’d borrowed the book for the bling factor, I was surprised that it was this piece that I most wanted to copy:

Probably the plainest outfit in the whole book, tucked away at the bottom corner of a page, but this simple T-shirt is so stylish! It’s called a “bandi”, according to the book, but a quick Google search reveals that that tends to refer more to a long, collared vest. But seeing as “bandi” is what the book calls it, I will too. I love that it fits so closely to the body and has a pocket set in to the front.  Originally I suppose the wearer would have kept a few coins and perhaps a key or two in it, whereas now maybe they store their mobile phones in there too. At the back of the book there are basic patterns for each of the main garments featured and I was very tempted to give this one a go, despite it being cut on the bias (kind of one of my sewing nemeses) …

…until I remembered that this top had been sitting around unworn for a while and I really should do something about that first.

(You can see the full post about how I’ve already altered this top once before here).

When I bought the top in Thailand in 2007, it was just a rectangle folded in half and sewn up the sides, with a cut down the middle for the head. I had sewn darts in it to make it more fitted and been wearing it like that, but it still wasn’t quite right. So I unpicked the darts, played around with it in front of the mirror and realised I could swivel the rectangle around like so, which would give me fabulously fringed sleeves…

… but there wouldn’t have been enough fabric to cover my tummy and the fringe probably would have got stuck in something whenever I stretched out an arm, so I went back to the more sensible idea of making it into a slightly better version of what it was to start with – a simple top – inspired by the bandi. I cut out more of the neckline from the center of the rectangle, but went a bit overboard. That mistake turned out to work in my favour though, because to fix up the neckline, I had to take excess fabric off the shoulder seams…

…and by doing that, the top instantly became shorter and the fringing around the hem now sat around my waist rather than on my hips. I also trimmed off a few centimetres including the fringing on the side seams up to under the arms to give it a more T-shirt kind of shape (you can just see the pins where I made the new seam below).

Some bias binding to tidy up the neckline, and everything was finished! A Thai hill tribe top was now a right royal T-shirt. In my imagi-nation, anyway. 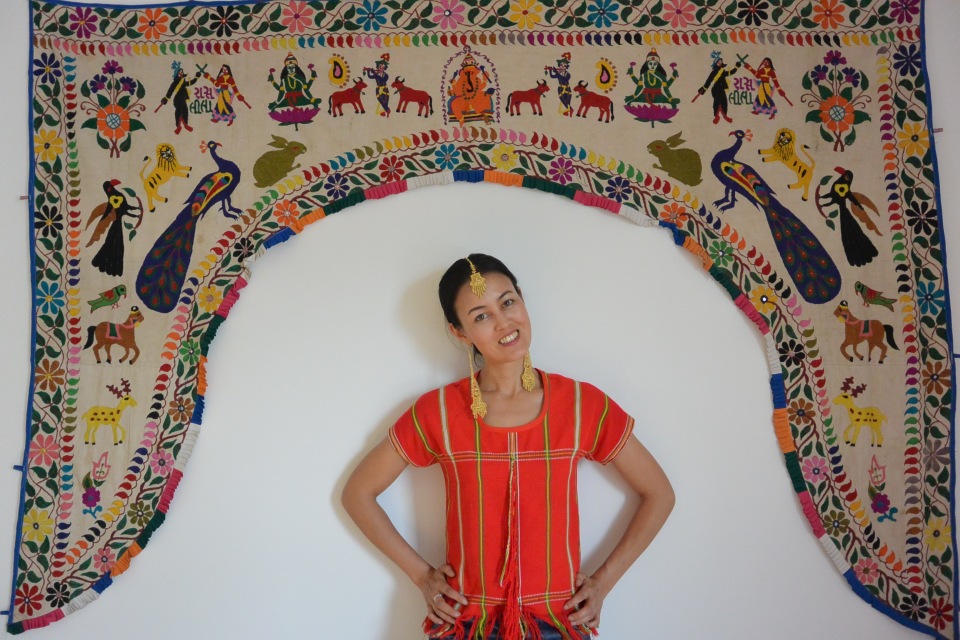 I had planned to use the strips of fringing that I’d cut off to decorate the front of the top, but the simplicity of the bandi was what appealed to me in the first place, so I left well enough alone and played with foster cat #2 instead.

(She looks like she’s listening intently to my every word, but she was actually trying to bite me. The things maharanis have to put up with from their supposedly loyal subjects!) 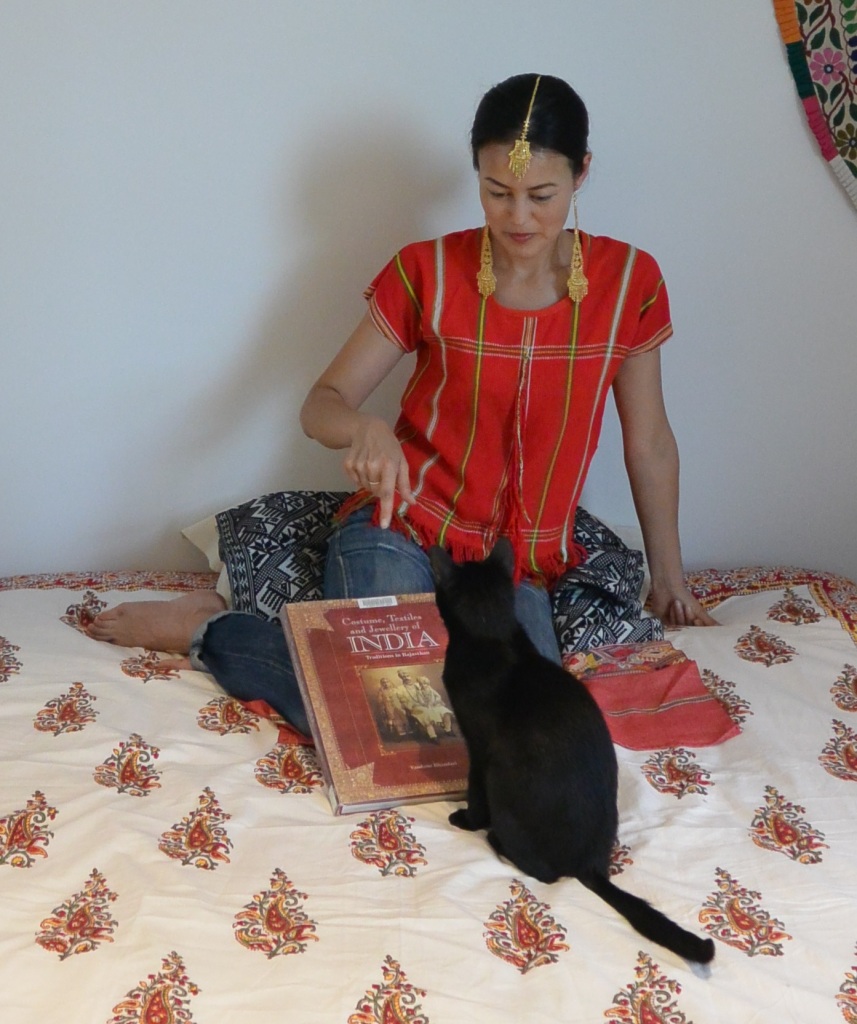 While my fantasy of being waited on hand and foot on my day off from princess duties hasn’t exactly been fulfilled, I did enjoy an afternoon of pampering with a member of the Melbourne blogging royalty, Cheryl of Busi Chic, a few days ago thanks to Miss Nail Bar at the South Melbourne Market. Mani and pedi that include massage with homemade coconut and vanilla scrub? And no noxious fumes, thanks to all the nail polishes being free of the big 5 baddies*? Don’t mind if we do…

And because you’re all such loyal subjects (and you don’t usually bite or scratch me, unlike SOMEONE I could name!), Miss Nail Bar is offering you 10% off their lovely services. Just mention this post and you too can have royal gold and silver at your fingertips (or whatever colour you want, actually: they have about 450 to choose from!). Wander in and find the Miss Nail Bar team at the South Melbourne Market, 322-326 Coventry Street, South Melbourne. They’re at stall 57,  (next to their other beauty salon, Miss Brow Bar) and you can just drop in as no appointments are necessary. If you do want to ask them anything first though, give them a call on 1300 647 722 or 0426 813 429.

*(I’ve always found it worrying that staff at nail bars wear masks to filter out the toxic fumes from the big 5, which are formaldehyde, dibutyl phthalate, toluene, formaldehyde resin and camphor. Isn’t being asked to wear a mask at your workplace the kind of thing that would normally set alarm bells ringing as regards the safety of the job!? And as a customer, it’s certainly pleasant to leave a salon with beautiful nails and WITHOUT a splitting headache!)

3 thoughts on “What a maharani wears on her day off”