Hmm, it might seem by my lack of posting this week that I have been lazy. In fact, the opposite is true. I’ve been working on a project in Vientiane, Laos’ capital, that I can’t reveal just yet, and it’s kept me busy all day – and then at night, the internet at home has been so slow it’s been impossible to do anything blog-related. But excuses aside, here’s what I got up to a few weeks ago in Luang Prabang, the former royal capital of Laos that is celebrating its 20th anniversary of UNESCO listing this year. The old town itself is often described as lazy, and for most of the time I was there I did little but relax in fantastic hotels (which is another story I can’t reveal right now!) but a few days in I decided it was time to get some exercise and see some of the countryside via an overnight trek courtesy of Tiger Trail. Judging by the scenery, I think I made the right decision… 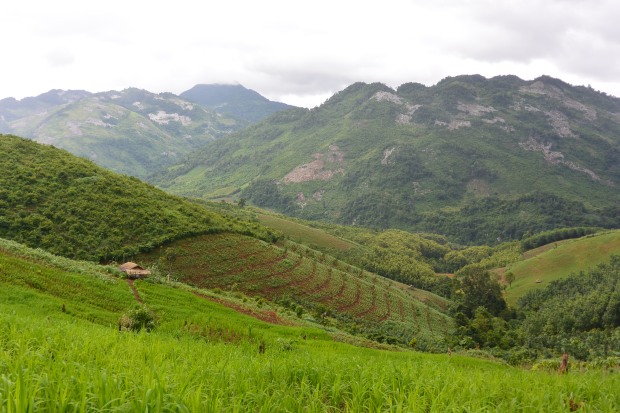 Of course getting up the hill to enjoy the views wasn’t all plain sailing. Being the wet season, there was mud EVERYWHERE – fine if you’re a water buffalo or a goose, a little more challenging if you’re human. Thank goodness for my guide, who was very patient as I picked my way through the mire. 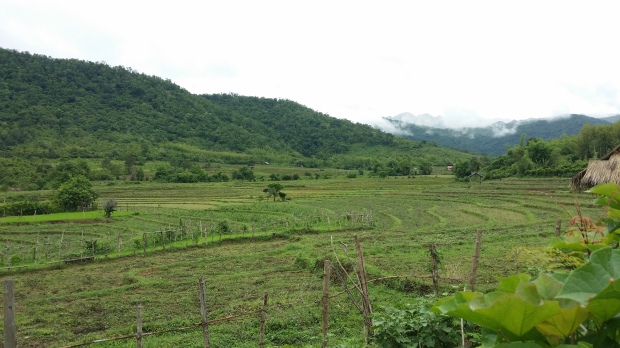 But we didn’t make it far before pouring rain forced us to seek shelter in a little hut next to a cornfield. A teenage boy and a little girl were in there, probably resting between working in the fields, and they offered us some boiled corn and chatted with the guide. I was moved at their hospitality especially as they appeared to have little more than the clothes they were wearing.

I was even more moved to hear that the boy was the little girl’s uncle: her mother (his sister) had gone to work in the north of Laos a few years ago and kind of disappeared, possibly stolen for marriage or something worse. They hadn’t heard from her for two years and the little girl’s father was an opium addict so he wasn’t any help. Apparently this isn’t an all together uncommon story, and fortunately the little girl is being looked after, but it made me feel really helpless as there wasn’t much I could do. Maybe there are organisations that could help financially if the boy’s family knew how to access them, but whether they would ever find his sister again is pretty doubtful, so the little girl is for all intents and purposes an orphan.

With all this in mind, it was in a fairly sombre mood that we continued our bushbashing. About three kilos of sticky mud per boot later (if I’d been at the gym it would definitely have been leg day),we wandered into the Hmong village where we were to stay overnight. There weren’t many people around as everyone was off working in the rice fields.

Some kids were lining up rice plants ready for planting (at least I think that’s what these are) but kind of disappeared into the house when I went to take photos.

These ones weren’t as camera shy!

After a few hours unwinding we went to eat dinner at the village chief’s house, but as it was rice planting season he was still out in the fields, so the guide and I ate a simple but yummy meal of rice and gourd stew and he told me some spooky stories about shamanism and people he knew who had been cursed (or done the cursing!) – made even spookier when the power cut out! Back in my mudbrick cottage I stomped on a scorpion before going to sleep under the mosquito net, surrounded by insect sounds and the grunt of a pig whose sty must have been just a few metres away. Luxury accommodation it was not, but it was clean, I felt a bit adventurous and daring (ha! most people in Lao villages live in bamboo huts!), and I slept like a log (hardly surprising after all the trekking).

The next day we set off past rubber plantations… 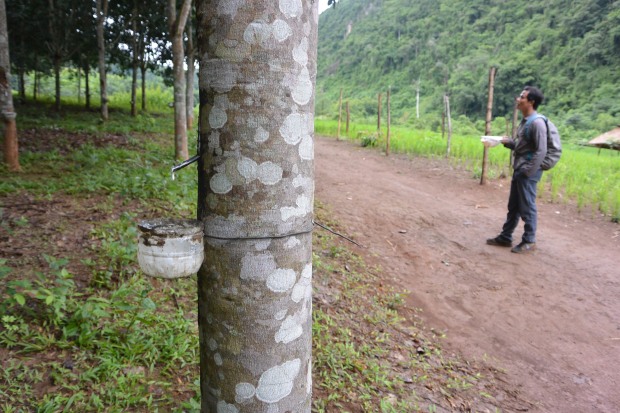 The raw rubber is collected here (you can see the “tap” in the trunk above – apparently it takes only about two hours to fill the container so it’s changed several times daily) and sent to China for processing as the plantations are run by Chinese companies, apparently. There is a lot of Chinese investment in Laos and it is changing the country significantly but it possibly wouldn’t be pertinent for me to go into much more detail about that at this point.

Thanks to the mud, there was a lot more scrambling up and down trails and my hands got filthy so I didn’t stop to take many photos until we reached the top of the Kuang Si falls (more on that here).

Right next to the waterfall is Free the Bears, a sanctuary for bears rescued from the incredibly cruel practice of bile farming that unfortunately is still taking place across Asia. Some bears have lived in cages little bigger than themselves for more than 20 years, living in agony while tubes “milk” their bile for traditional medicine that apparently has no proven results for most of the ailments it’s used to treat.

While it was horrific to imagine how these beautiful animals must have suffered, it was cheering seeing them at rest and play in their new safe home.

Maybe there was a bit more rest than play going on …

Last stop before heading back to town was the Butterfly Park. It’s run by a couple from the Netherlands who sold up everything back home to establish this little patch of paradise not far from the waterfalls. I couldn’t resist taking a photo of one of their staff members…

But of course it’s the butterflies (and caterpillars) that are the real stars of the show here (sorry, kitty!). 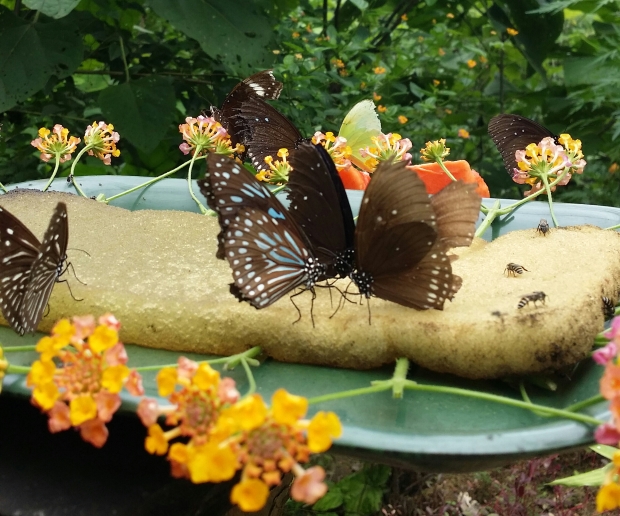 Wandering through a little botanic garden (the only one in Luang Prabang as far as I know, and maybe the only one in the whole of Laos?) surrounded by butterflies was a picturesque end to the trek. If you’re interested in seeing the countryside, experiencing village life and visiting beautiful attractions around Luang Prabang (waterfalls and butterflies and bears – oh my!), I’d definitely recommend dropping in to Tiger Trail – they’ll help you find just the right adventure.

One thought on “Not-so-lazy Luang Prabang”