What would Alexa wear?

Do you like games? How about playing spot the difference? 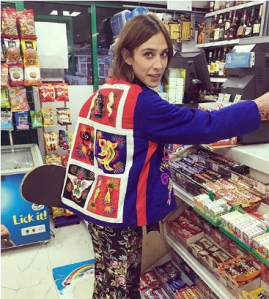 Tricky, isn’t it. In case you can’t work it out, one of these women* is a global style icon who is purchasing something (obviously the coolest item in the shop) in between cruising to super-cool destinations on her skateboard (which everyone knows is the coolest mode of transportation, like, ever) and the other is me.

When it comes to what we’re wearing, though, Alexa Chung and I do seem to have quite similar taste.

I bought this vest at a church fete last year for the princely sum of $2. It was hanging on a rack with an ancient supermarket bag wound around the hanger which contained an embroidered hat with black yarn plaits attached. This made me think maybe the vest (and hat) was some kind of theatrical costume, but when I did a bit of Googling, I found out that the vest is appliqued with “five poisonous creatures” and given to kids to be worn as protection from them in May, which is traditionally when farmers try to rid their land of pests. 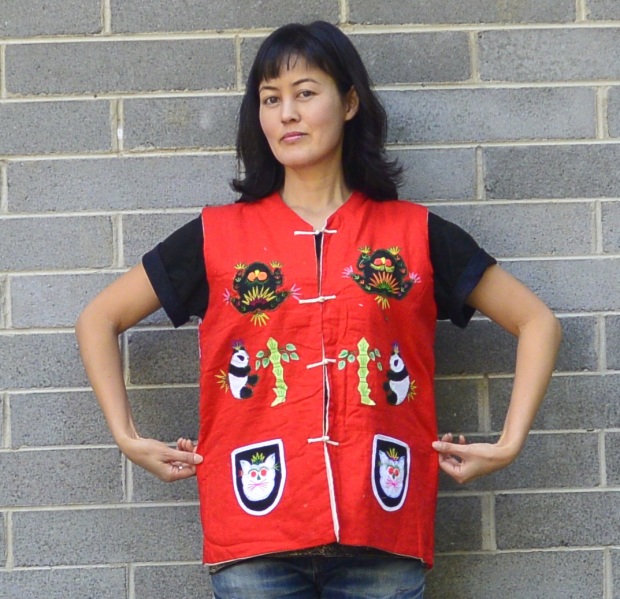 Given the animals appliqued onto the vest, it seems “poisonous creatures” include pandas and cats, and I do concede that I haven’t been plagued by pandas since I started wearing this vest. Cats, on the other hand…

The back of the vest is a bit more realistic in terms of what is “poisonous” or dangerous, with toads, snakes, scorpions, centipedes and spiders depicted.

Whoever made the vest put a lot of effort into it – each animal is framed by log cabin-like patchwork.

Each square on the back of the vest was worked onto a paper backing which I suppose lent support to the quite-flimsy fabric in the sewing process. However, it also made the resulting garment stiff and rustly and gave it a funny sticky-out shape. 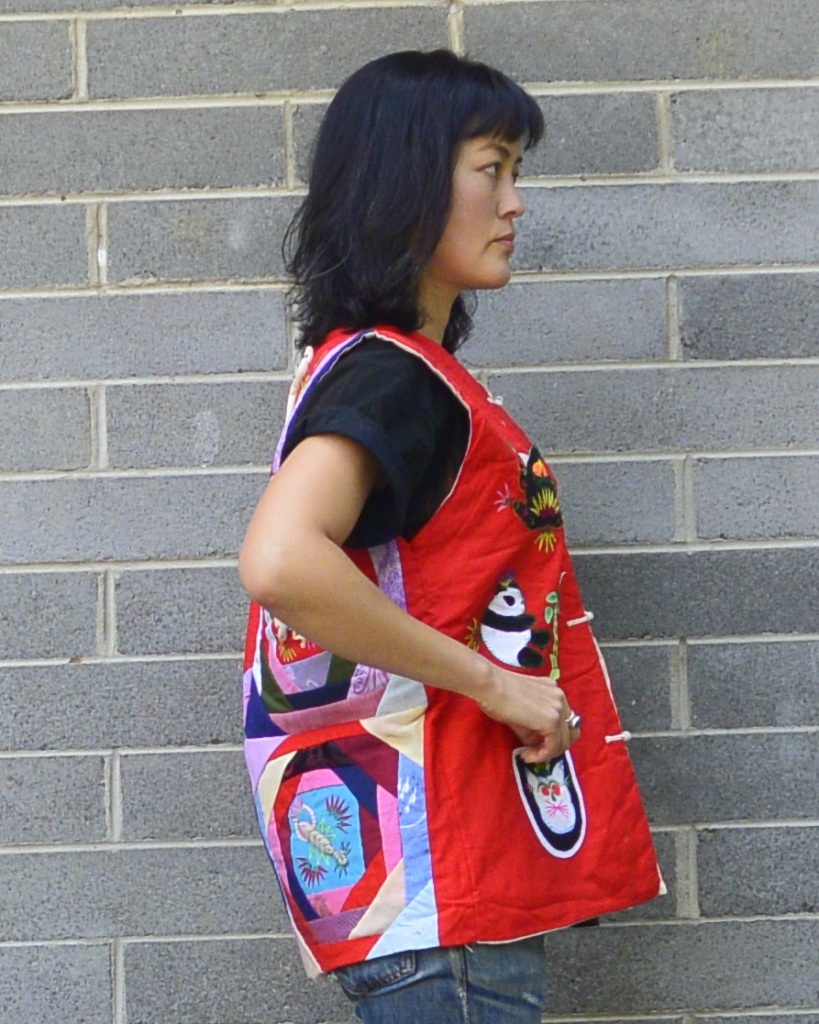 I decided to remove the paper and replace it with iron-on interfacing instead, as that will provide support for the fabric but with less noise! Removing the paper has proven slightly more time consuming than I thought, though, because it is not only stitched but actually glued to the fabric.

I’ve been peeling little bits off, all the while hoping I wasn’t inadvertently getting rid of secret spy documents or important historical records that had been stuck in there by an enterprising agent hoping to avoid official scrutiny. (Clothes and fabric have been used for this kind of subterfuge in the past! Lots of interesting stories here.)

Most of the bits of paper inside the vest seem to be receipts rather than classified files, although there were one or two letters (or maybe shopping lists). Pity my Chinese isn’t better, but even if it were, it would have been hard to piece them together after I peeled them off the fabric.

While I was at it, I removed some wadding that was making the vest bulky, took the side seams in a bit from underarm to waist and slightly shaped the shoulder seams. I also opened out the side seams from the hem to the waist for a less boxy kind of fit.

I did all of this in a bit of a hurry as I wanted to wear the vest to the quilting symposium I spoke at last month. Needless to say (needles to say? haha) I got quite a few comments about it from quilting ladies who appreciate a log cabin patch or two. 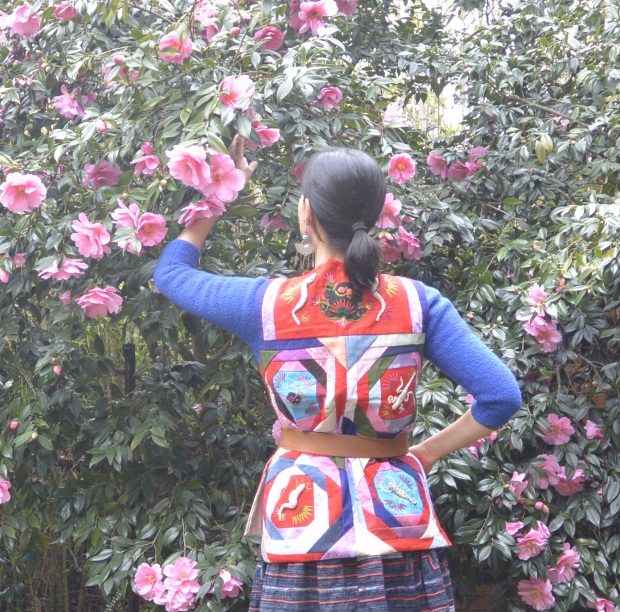 I still haven’t actually finished removing the paper or finishing off the vest properly, but it is more wearable now. Not sure if I’d wear it skateboarding** but it’s fine for posing in the backyard, at least.

And apart from pointing out how all the cool kids are wearing these vests nowadays, I also wanted to say how traditionally flat garments (ie most Asian jackets and tops made traditionally) can be worn in a less costume-y way with just a little nipping in of the seams and/or the addition of non-traditional accessories and other items, such as the belt I’m wearing in these shots and the pants  with which Alexa Chung has paired her jacket. If you need more proof of how easy it is to contemporise ethnic dress, look at how Jane Aldridge styles a similarly shaped jacket. Actually, check out her entire blog as she has amazing style and finds fantastic vintage things – sometimes for even less than $2! – although I’m yet to see her in a vest like this one.

**If I did, then I should put the wadding back in… who am I kidding? I should wrap my entire body in wadding before even considering skateboarding!

← A patch of bother
Every week is National Op Shop Week →

3 thoughts on “What would Alexa wear?”