When a dress has been three years in the making, it’s worth showing it off a bit, right? I bought this turquoise number for $3.99 at Savers while on a bloggers’ getaway in 2013 (!) but only last week did I actually finish altering it.

Originally it was a hip-length kind of bomber jacket with no front fastenings, elastic around the bottom and plain, loose sleeves. It was handmade, perhaps for fancy evening events. I’m sure I took photos of it as-was when I bought it, but can’t find them, so this is the most “before-y” shot you’ll get.  It shows how I unpicked the hem and removed the elastic from there, sewed the fronts together to make it into a tunic and added elastic in the cuffs.

Having done that, I waited a year or so for inspiration to strike, dabbling with the idea of changing it back into a jacket with frogging down the front, or adding appliqued beach scenes, or making patterns on the sleeves and back with rouleau loops, or a million other ideas which all revolved around using up bits and pieces of my fabric stash, as does just about any DIY project I undertake. Finally I decided to make it into a mini dress and incorporate patches of kimono and obi fabric, first lengthening the tunic into a dress by attaching the hem section I’d chopped off this pink skirt (you can see the skirt here too). 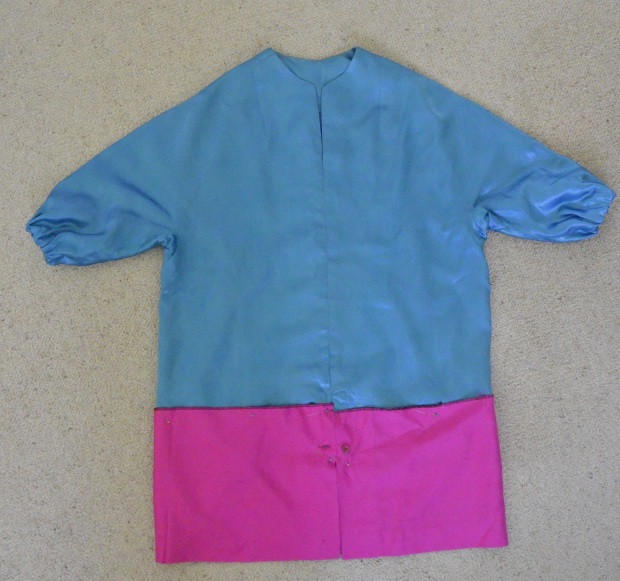 The pink hem and the blue tunic fitted together perfectly and once I’d sewn them together the basic dress was ready to be decorated with kimono and obi scraps that have been patiently waiting to make an appearance for, oh, about 12 years. Here’s the dress from a few different angles, with the dog thrown in for good measure (note her attempt at “blue steel”. I think she’s pretty much nailed the moody model look. Also note, I am not in front of the grey brick wall because 1. mum happened to be around so I got her to take photos instead of having to fiddle with the tripod and 2. a certain reader has been complaining that they are sick of the brick wall. Is this better, Aunty Ann?)

Hmm, really should have ironed the back before I got photos taken…

The more observant among you may have noticed that the pink hem section of the dress hasn’t been sewn together at the front. This is because I’m still toying with the idea of turning it back into a jacket, ie opening up the front again. It’s a bit hard to tell from the photos, but the orange obi on the front is actually two rectangular patches that meet in the centre, rather than one big squareish piece that covers the centre seam. I attached them that way on purpose, because I know how often I change my mind about clothes I’ve made, and this will make it easier to convert the dress to a jacket if the mood takes me.*

I wore the dress out to the last show at MSFW as I knew the show would be colourful and no one would look at me as if I were crazy for wearing something other than black, white or grey in Melbourne. Ideally, I would wear it with bare legs and chunky heels, but the weather wasn’t spring-y enough for that so I had to pull on some tights and boots. Then, because it had taken three years to make, I wore THE SAME OUTFIT (shh! don’t tell anyone!) to a fashion-y do on the weekend and got someone who is a lot better at taking photos than me to snap me in front of possibly the prettiest roundabout in Melbourne.

I think I’ll get quite a bit of wear out of it as it’s fancy but quite comfortable, ie I can eat a BIG dinner while wearing it (which I did on Saturday night!), which is not the case with some of my dressier outfits. Imagine all the comfortable eating I could have been doing if I had finished it three years ago! I’ll just have to make up for it now…

*If I did convert it, I’d do it in a way that meant I could still wear it as a dress like this too, but I’m still working out how to do that without adding buttons or a zip. Probably I’d make a secret panel that attaches on the inside and holds the front together. Doesn’t a secret panel sound exciting? Oh, wait, I’m thinking of a secret control panel. Dammit!

One thought on “Bomber + brocade”