A while ago I posted about my favourite jacket pattern and mentioned that there would be an addition to this family very soon. Well, I’m proud to announce that, many fitting and styling dilemmas later, this purple piece is finally finished. I don’t know why I had so many issues with it, I put it down to 1. attempting two new elements in the one garment and 2. sheer laziness.
Allow me to explain…
The fabric for this jacket came from the Salvos – I actually bought it for the girls in my sewing class to use but they never chose it for any of their projects and as it seemed like a good wool (or wool-ish) fabric I didn’t want to let it go, even though I only paid $3 or so for it. I salvaged it and spent a while ruminating on how to make it different from the other jackets I’ve already made in this pattern. 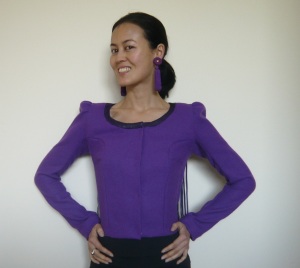 I was searching for scraps of leather for another project (which will be revealed at a later date) and hit the jackpot at my local market where a leather jacket stall sells quite sizeable offcuts for about $2 each. Originally I’d thought about making black leather accents for this jacket but found big scraps of eggplant-coloured leather instead (apparently black offcuts are never as generous in size as coloured offcuts as black leather is so much more in demand that even little bits get used).
Anyway after much deliberation I finally started hacking into the leather to make fringing which I ended up sewing into the shoulder seams (they are on an angle so I had to take that into account when thinking how the fringing would hang.) 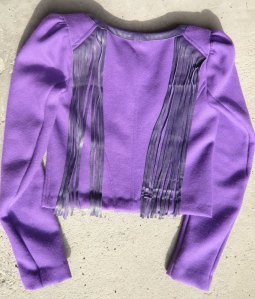 I also decided to make the neckline in a leather trim but had to think for a very long time about whether I wanted the front placket in leather or just the collar line… this explains the “attempting two new elements in the one garment” thing as I’ve never sewn with leather and never added anything into the shoulder seams (originally I wanted to do piping in a kimono trim but none of my stock seemed quite right). Surprisingly leather can be sewn on a normal sewing machine, although whether it’s really advisable to sew it with a normal needle and thread I cannot say (I did, but I’m sure there are fancy-pants needles and threads just for leather for those of you who like to make a bit more of an effort).
So where does the “laziness” come into it, considering that this jacket took me, for lack of a quantifiable description, ABSOLUTELY YONKS? Well, I decided I wanted to whip this one up quickly and couldn’t be bothered doing a lining. Now that is lazy, and it came back to bite me, as this jacket really did not sit very well across the shoulders or bust, namely because I don’t exactly have an abundance of either, but also because the material probably needed some support. You know, the sort of support that comes from LINING.

Anyway, about a zillion fittings and TWO SETS OF SHOULDERPADS layered one on top of the other on each side later (I had to cut them so they would fit at the right angle and not stick out past the collar), I was finished. Sort of. But then I got distracted by how I was going to actually fasten the two front sides together. I didn’t want any buttons because, firstly, there’s already a fair bit going on with the fringing at the back, but also because I’m not exactly fond of using the buttonhole foot on my sewing machine. So somehow I had to make it fasten invisibly. I considered magnets and even bought the sort that are used for closing handbags, but once they are concealed under a layer of fabric (as per my plan for making the fastening invisible) the magnetism (? force?? attraction??) becomes too weak, so it was back to the drawing board and I ended up going with large press studs. Now if I had just made that decision from the start this jacket would most likely have been finished weeks ago.

In sticking with the laziness theme, please note I was too lazy to put on makeup, think of a full outfit to go with the jacket, or pick my way through the mud in my backyard looking for somewhere to take photos where the light actually made it possible to do so when I took these shots.