The dream comes to an end

Fashion Week continues tomorrow, but for me it was the last day I could attend any shows as normal life resumes… ie I have to actually go back to earning a living at my day job!
I did the three-events-in-one-night thing again, starting with a quick visit to Somewhere Gallery in the Royal Arcade to see a fashion illustration exhibition by Sarah Hankinson. Then it was off to the Designer Series show at the Melbourne Town Hall again but this time I was seated in a bit of a tricky spot so couldn’t get any good shots of the runway… or even really of the big screen.

Finally off to ACMI for a movie about Barbara Hulanicki and her Biba empire which was inspiring to say the least… I wish I had a time machine* so I could go back and just wallow in all the gorgeousness of London in the 70s. I didn’t know much about Biba or its creator – did you know she started off as a fashion illustrator? And that when she stopped running Biba she eventually moved to Miami of all places and became an interior decorator? So much talent, and totally chic on top of it all…

*Speaking of time machines, this dress which I wore today would be perfect to wear on one, don’t you think? 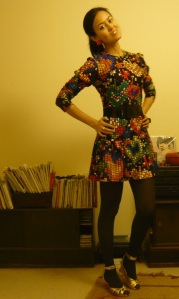 I’ve shown it off here before but today I wore it with a belt which gives it a bit of a different look. Plus it fits the Self-stitched September criteria (well my criteria anyway… most of the things I wear won’t be made from scratch but I will have done something to them!) as I had to do a lot of repair work on it to patch up the holes

(luckily the crazy pattern hides all this pretty well) and completely replace the zip and neaten up the lining, but I think it was worth every cent of the huge $7 I paid for it at Savers.. which reminds me, it’s 50% off at Savers next Monday so you know where I’ll be!!

6 thoughts on “The dream comes to an end”