No, I have no idea why this pic is on its side either. But can you tell what it is?
Tip: tilt your head to the left. 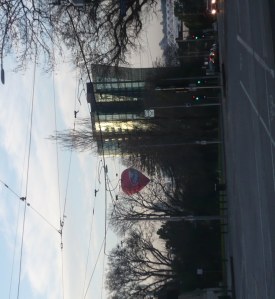 Yes, it’s a hot air balloon floating over Treasury Gardens (at least I think that’s what those gardens are called off Spring Street?). This was taken at 7:15am on Monday morning. What on EARTH was I doing in the city at that hour? Attending the Melbourne Spring Fashion Week business series breakfast at the Grand Hyatt, of course. In fact I attended the breakfasts for all three days that they were on – you may have read my amateur attempts at Tweeting about the final session this morning? Yes, I’m finally on Twitter, although only after a lot of kicking and screaming. Anyway, the sessions were interesting and if I get time later I might even post something more thought-provoking than my usual babble, but for the moment, here’s some snaps of the first two days of Fashion Week!

I tried out my Frida Kahlo look and got stopped in the lift at work by a guy who collects Asian textiles (it’s made from Thai silk) – should have found out who he was as I love a good chat about ethnic materials. And no, there is no innuendo in that as he was way older than me and a total gentleman!

Cecylia looking chic as usual… she even looks cool in her vet uniform which she wears with SILVER flats (she moonlights as a vet and actually treated Suki the other night!)

Alicia from Sea of Ghosts – how cute is this picture? She looks like a modern Audrey Hepburn mixed with a bit of Emily the Strange … in a good way.

And here she is again with Cheryl from BusinessChic. Two Melbourne girls in black – but of course! 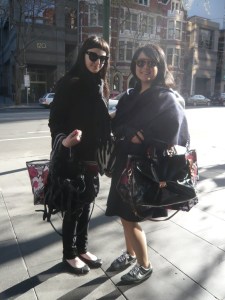 Cheryl’s bike helmet is all ready for spring…

After work I dropped by the Saba party … 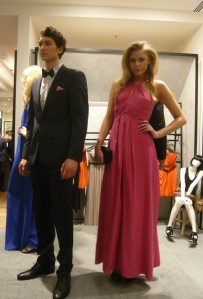 Loved the mannequins’ bobs! I would love to try this look but despite being half Asian (which you would think makes me an ideal candidate for this style) my hair takes after the Caucasian side of the family and would not work with this at all. 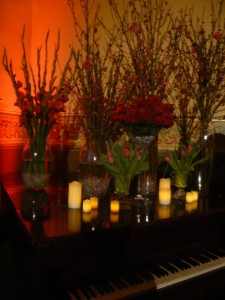 I don’t have any pics of Dannii (who was wearing a crystal-encrusted gown by J’Aton Couture) but the room looked gorgeous, and so did her display of dresses which have particular meaning for her. 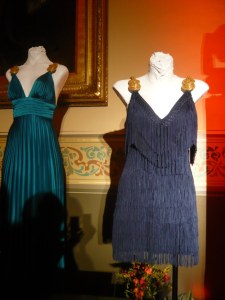 Hmmm, I wonder which pieces of clothing I’d include if someone asked me to put on that sort of display? I suspect it would be tricky to narrow it down as I make so much of my own stuff.
This silver wall with what looks like origami on it was cool thanks to the fancy lighting… 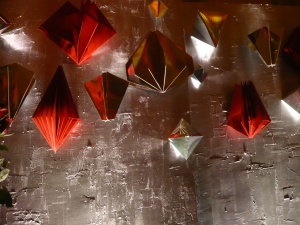 On Tuesday I checked out the Emerging Designers Exhibition at 1000 Pound Bend which I’ve already blogged about here. But here are a few more pics.

Collar with bits cut out (so eloquent, aren’t I!)

Upstairs is an art gallery and a very cool space! 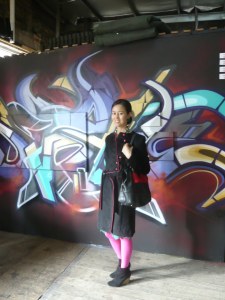 That’s my sister strolling around…

Back downstairs the amazingness continued with this photo exhibition of models in the students’ work. 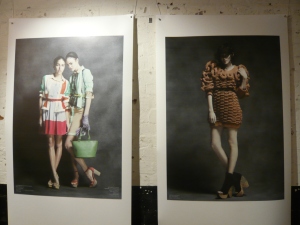 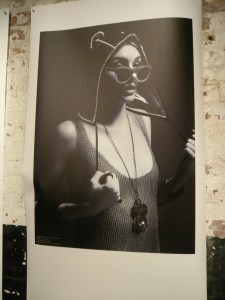 Look at this amazing collar, the tips are all puffy and 3D… talk about mad tailoring skills! 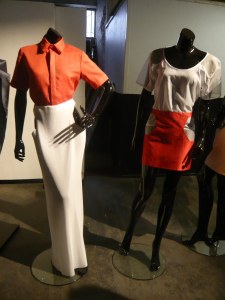 After all the furore about fur I’m a bit unsure about posting this dress by Jack Loder, but I think it is cowskin, which makes it a meat by-product and not quite so controversial.*

And how about feathers?

Yes, this is quilled material decorating this dress! Another example of mad skills.

And being a sucker for macrame and tassels, I love this dress… 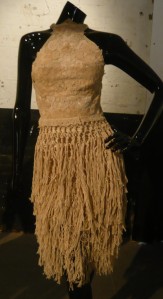 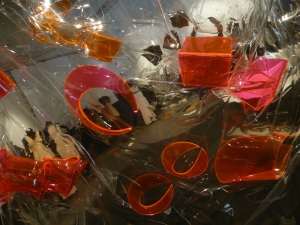 And finally, the shows began on Tuesday night… there’s a brief review up here, but here are some snaps…
The parade started with a ballet performance with costumes designed by Toni Maticevski (who I met when he was just starting out on his design career and spotted carrying his own dresses into his show!!) Great lighting here showing the silhouette of one of the dancers, although unfortunately reminded me of Jamiroquai. 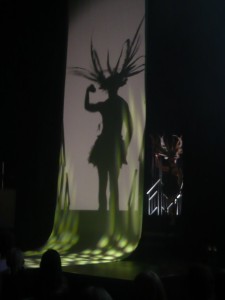 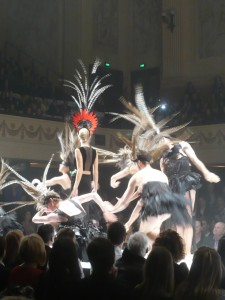 I was seated at the side of the runway and it was hard to get good shots because of the lighting, but I managed to take some of the big screen instead…
Loved this outfit by Yeojin Bae on super-cute, seriously leggy model Kate Peck. Not sure I could carry off this look though. Only because I can’t wear too much red close to my face, of course, haha.

I think this dress was by Aurelio Costarella… 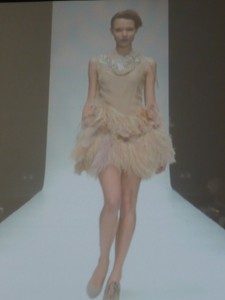 And this one on Alice Burdeu was by Rachel Gilbert.

Fairly stunning finale with Sophie Van Den Akker in Rachel Gilbert stationed at the end of the runway as the other models filed past.

Sorry I was so behind but this week has been go, go, go! I’ll manage some more posts over the weekend, hopefully. Have a good one!

*My highlight of this week would have to be the reporting in the mX about the PETA protesters:

“EXPOSED ANGER
Naked PETA protesters caused an uproar at a Melbourne Spring Fashion Week runway show in the Town Hall last night. About 20 of the animal activists denounced designer Rachel Gilbert’s use of fur. It’s believed towards the end of the night, one protester crashed the runway for about five minutes. An onlooker told mX the nude protesters clutched ferrets.”

The thing with the ferrets and the nudity totally did not happen, but you have to love the onlooker for having such a vivid imagination. I cannot WAIT for someone from a newspaper to interview me about something just so I can say, “well, there were some people and they were clasping rodents to their naked bodies”. Onlooker, you rock!!

← Linkity link
Mexing it up →

One thought on “MSFW first days”