Our haul from the Nuffnang op shop crawl

It’s taken me a little while, but finally, here are some snaps from the op shop crawl I did with a group of bloggers at the end of March. The gathering was organised by Erica and Nuffnang joined the party too. Without getting too ahead of myself, here I am at the end of the crawl with one of the treasures I found – a commemorative bowl from the 1937 coronation of Edward VIII, whose reign, as you’re probably well aware, did not last long due to the overwhelming charms of a certain Mrs Simpson.

Here is the bowl (which cost me the princely sum – get it? – of $4. Surely such a piece of history is worth more than that??!) in its native environment, ie the Mecwa op shop on Chapel Street, Windsor, which is where we kicked off our day of discovery.

I remember my grandpa had a copy of this particular issue of Australian Geographic! 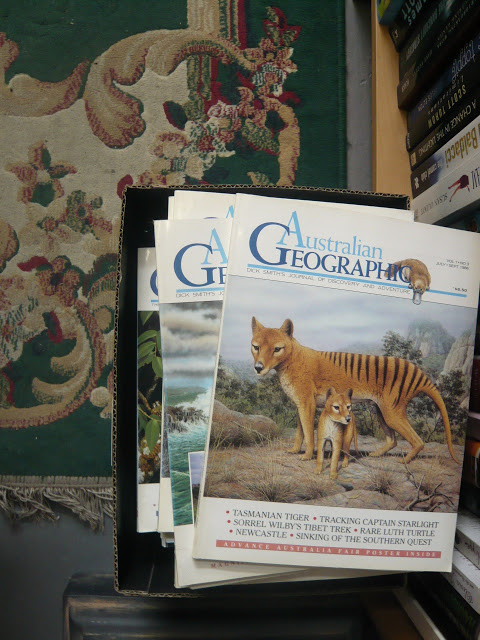 There are cute and humorous touches throughout the Mecwa shop which makes it fun for browsing even if you end up leaving empty handed (although we all know the probability of that happening is practically zero). 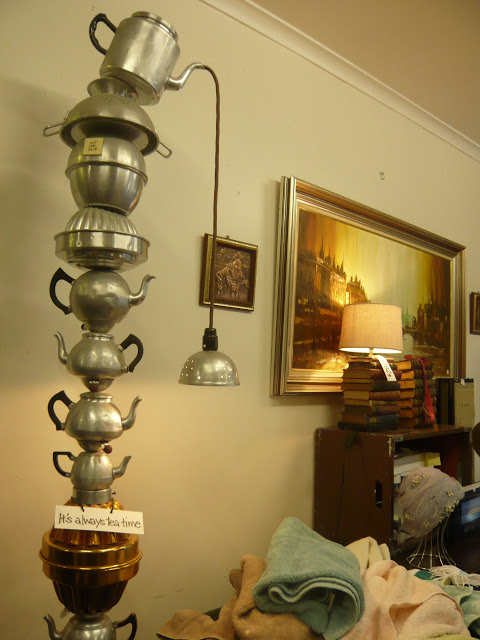 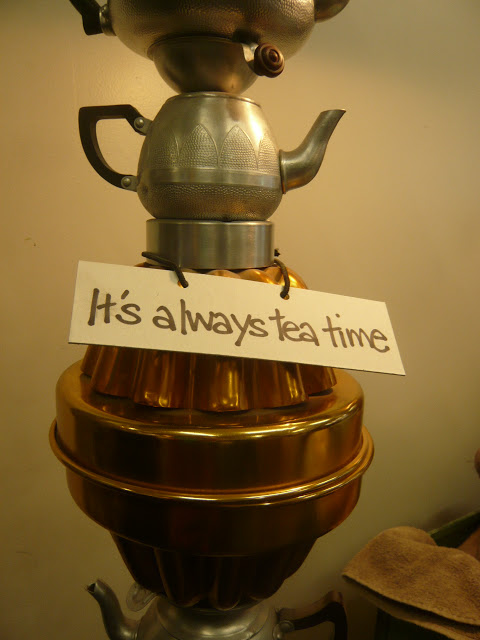 In the Sacred Heart Mission store I found this cool movie poster, but left it there for real film buffs to enjoy…

The Sacred Heart staff obviously also enjoy creating a bit of visual merchandising magic – I like their parasol display. 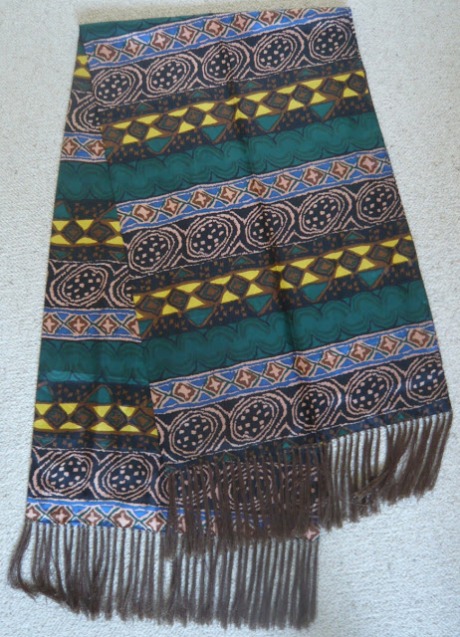 After Mecwa and Sacred Heart we went on to the Salvos and the Storehouse Charity op shop … we caused rather a scene crossing the road as there were so many of us! 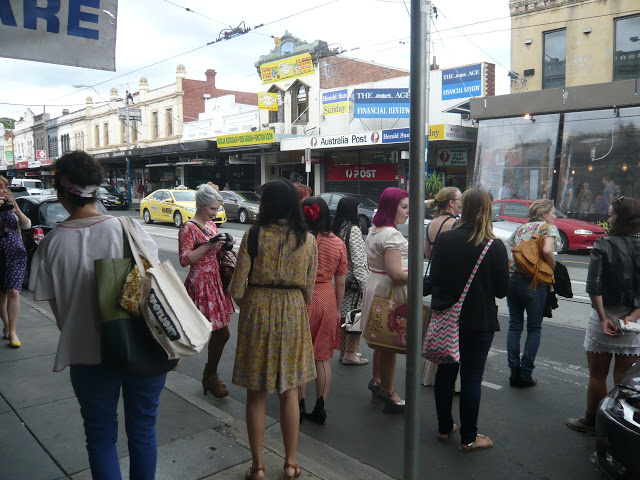 I didn’t find anything else and to tell the truth it’s not like I need more things anyway – not that I would abstain from op shopping if I found something I really, really wanted. By that stage though, what most of us really wanted was some sustenance of the edible kind, which we found at Tyranny of Distance, aka “cafe and lubritorium”.

Here’s half our group getting to know each other a bit better before tucking into some yummy lunch. (L-R: Zoe, Marianne, Trish, Maria, myself and Kate). 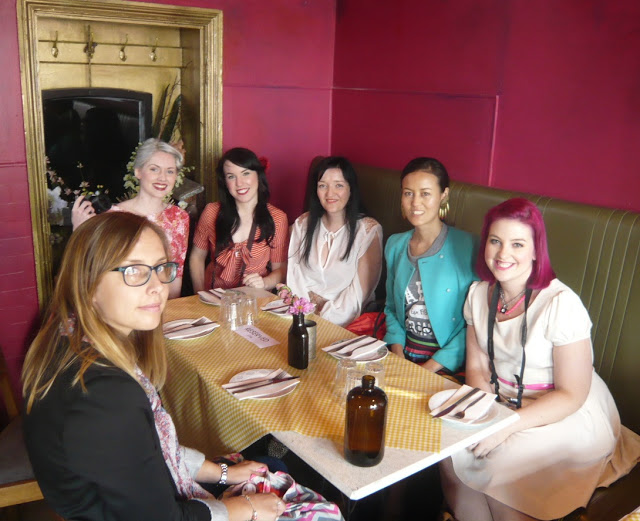 Of course, ironically, hungry bloggers don’t actually eat their food once it arrives, they just photograph it… 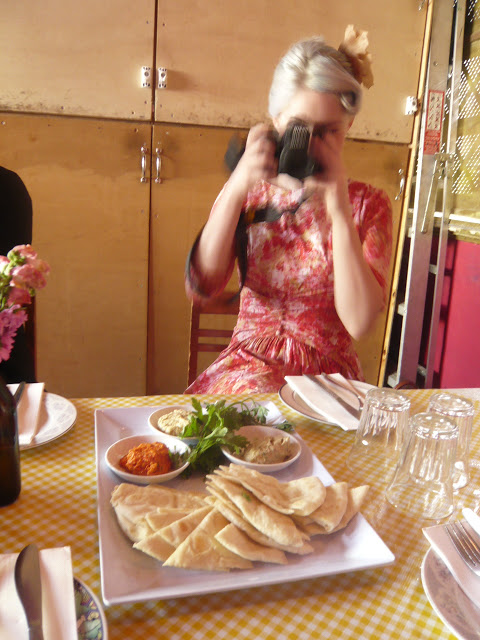 Just joking! We actually made short work of everything, especially the haloumi cheese, which, along with op shopping, is one of my favourite things in the world.
I think this metal card case she found at Mecwa was set to become one of Trish’s favourite things… 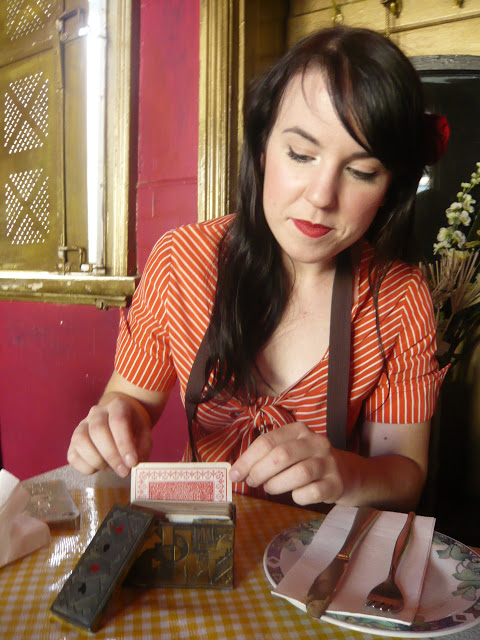 It looked Middle Eastern but actually has “made in Japan” stamped on the bottom. 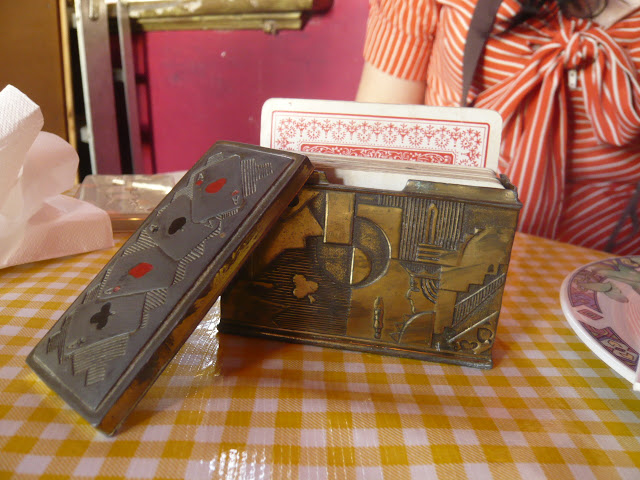 I think that’s one of the joys (and sometimes frustrations) of op shopping – revelling in the mystery of your finds. There’s probably no way of finding out much about this box, or the owner of the bowl I found, but it’s fun thinking about where they came from and who owned them before. Of course one of the other joys of op shopping is meeting like-minded people, which certainly happened on this tour. Thanks Erica and Nuffnang for a lovely day, and thanks to the other bloggers for joining in the fun!
I didn’t get shots of everyone, but the other bloggers who joined in today were: Laura, Vicki, Cintia, Cecylia, Sharon and Mary.

7 thoughts on “Our haul from the Nuffnang op shop crawl”