When was the last time you heard someone ask “do you have a hobby?”. “Hobby” sounds so quaint, doesn’t it? I think the last time I heard it used seriously was in my Japanese language classes way back in uni (and I do mean WAY BACK) when we had to practise asking each other our interests. But it is a good way to explain my collection of secondhand sewing patterns. “Collecting vintage sewing patterns is my hobby” kind of sounds better than “I have two filing cabinets and several boxes full of patterns I found at op shops and I will buy more if given even the slightest chance”, don’t you think?

Unfortunately most of them have sat unused for years as I just don’t have the time (or need) to sew from scratch any more, although occasionally I do flip through them and set aside the ones I’d like to try (or, as the case may be, the ones that happen to look like Australia’s prime minister at the time).  I would love to be so clever as not to even need to use a sewing pattern for a relatively simple dress (not that that would stop me buying them), but I’m not that skilled, so when I recently decided to turn some emerald green cotton fabric (naturally, this was also bought at an op shop!) into a shift dress, I rifled through my stash and decided to give this pattern a go.

I have always loved this colour but I’m a bit wary of green in general as it doesn’t always flatter Asian skin tones and can make me look sallow. Even when I was much, much younger, I took care not to wear it close to my face…

A few years on, it turns out these kind of shades are actually not so bad – in fact, they make me look quite tanned, even when indoors taking selfies so you can see how the dress potentially could have turned out. This is the nearly finished shift dress, made per the instructions for Dress B on the pattern.

Me being me, though, I couldn’t resist fiddling around with it. 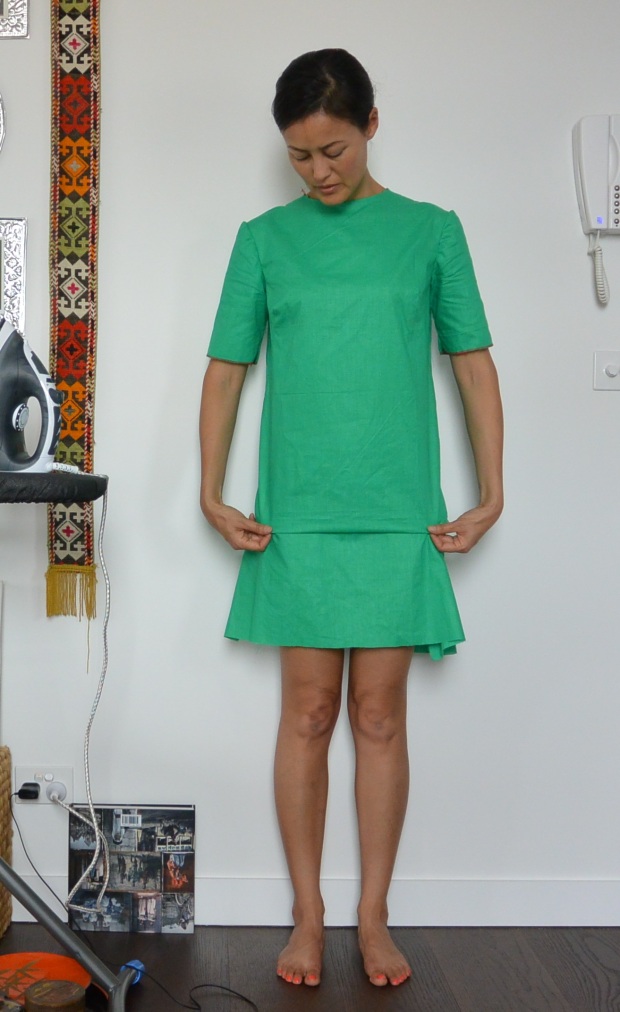 I realised it looked a bit more modern folded over a little at the hips, kind of to give the appearance of a top worn loosely over a skirt.  Plus, tucking up even a little bit of the skirt made it stick out ever so slightly at the hips, giving it a bit of an A-line and a more flattering look. See?

The original pattern is really for a tunic to go over a pencil skirt, so it has slits up the sides. After I hit on my alteration idea, I ended up turning the excess sticky-outy fabric that was meant to be folded over for the slits into pleats instead. Here is the inside back of the dress before I did anything to it (you can also see how it’s folded up from the inside around the hip line).

My alteration involved bringing the side seam of the pleat section in to meet the dress side seam, and sewing down the excess fabric on each side to form a pleat.

Here’s what the finished result looks like, on the inside (yes, a bit messy, I know)… 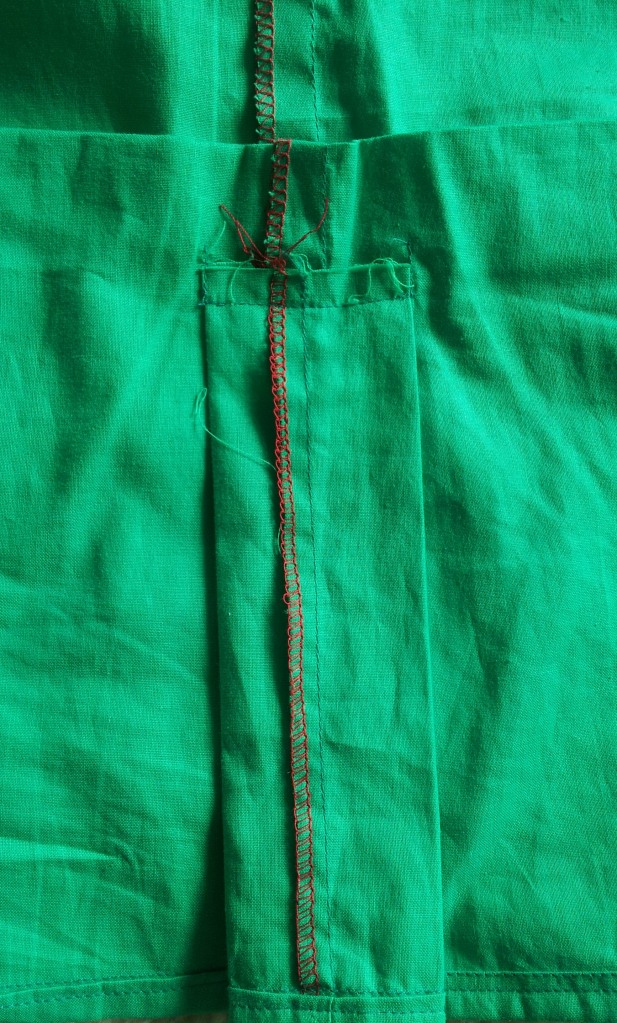 …and on the outside. Basically an inverted box pleat on each side of the hips.

But now for the more important question: what does it look like when I actually wear it? A little something like this…

You can see the side kicking out ever so slightly in this photo.

And here it is in motion… I like this shot for all its imperfection – the weird way my face looks flat and the fact that you can see my impromptu photographer’s shadow in the lower right (thanks Jodie)!!

It also pleases me that apart from my sunglasses, my entire outfit is from op shops and flea markets, although admittedly this is not exactly an unusual occurrence. I think the most expensive thing in my whole outfit is my bag, which was maybe about $7 but totally worth “splashing out” on as it is a handmade bilum – and because I love it! I’ve styled my outfit here fairly simply as I wore it to work, but I’m looking forward to seeing how I can bling it up a bit for fancy functions.

By the way, this is not the end of the story when it comes to this green material, as there was rather a lot of it, so stay tuned to see what else I’ve whipped up from it using my vintage patterns!

2 thoughts on “Working the day shift”