As just about any article on healthy ageing will tell you, a key factor is keeping your brain active. Crosswords, sudoku, learning a new language – they’re all standard recommendations for mental fitness. But what about calligraphy? Having tried it recently, I would argue it deserves to be on the list too.

There’s a considerable element of meditation in calligraphy  – several minutes at the start of the class was spent grinding the inkstone into a “sea” of water to create the ink. Of course these days commercial ink is available, but I think the teacher (Miho Araki) wanted to get us into a relaxed state before demonstrating what we were meant to write… (the complexity of the Japanese characters would be enough to make anyone hyperventilate!).

Miho wrote everyone’s name for them while we were struggling to master some brushstrokes – this is my name (she used Japanese phonetic script for most people’s but “Leeyong” is Chinese so I asked her to use the Chinese characters, which mean “jasmine” and “some kind of rose”. In Japanese phonetic script it would be りーよん, りいよん or リーヨン, in case you were interested!) 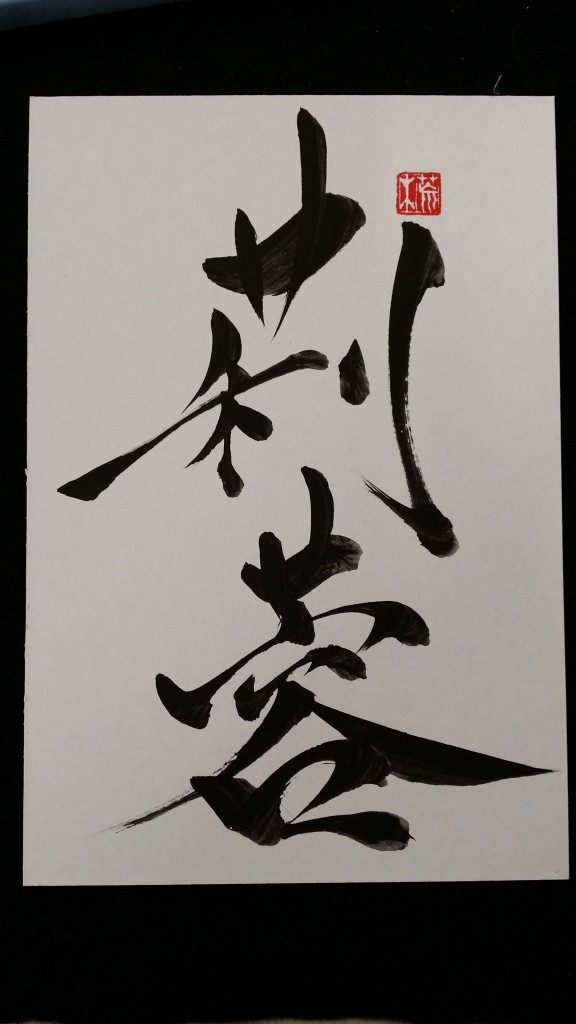 Theoretically we were meant to create a “zen” circle in which to write the characters but not being a martial arts student I didn’t really feel like writing anything about warriors… so, Mr Squiggle-style, I rebelliously turned the circle into…

Yeah, I know, I’m never going to be a great calligrapher! But somehow the addition of Miho’s seals makes this amateur attempt look quite artistic, don’t you think?
Controlling the brushstrokes is impossible if you’re jittery – calligraphy calls for calm – so if you want to work your brain, get a bit more focused and maybe even create some artwork, give calligraphy a try. And if it doesn’t work out, at least your practice attempts won’t go to waste – Miho uses the paper her students write on as placemats at her restaurant, Ebisu (if you’ve been recently and seen some particularly bad scribbles… that could well be my work!)!