In all the time I’ve been writing this blog, I don’t think I’ve once shown you a DIY that hasn’t worked out to my satisfaction. But it just so happens that I’ve been asked to take part in the Vinnies Winter Warm-up, and as this involves freeing your wardrobe of coats, jumpers, jackets and other cold-weather gear you no longer wear to help out those who are less fortunate, it seems like the perfect opportunity to post about a not-quite-right woolly cardigan.

I bought this pale blue knitted grandma-ish number from an opshop for $5 ages ago. It seems to have barely been worn but the style dates from the ’60s or ’70s.  The bulkiness, the thick neckband, the big yarn-covered buttons and the diamond pattern on the front and sleeves were all interesting design elements and I was looking forward to slightly reworking it and being showered in compliments for my creativity. It took me a long time to do anything to it because I got stuck for ideas (so much for that creativity!) but a few months ago I started using some leftover brown wool* to stitch over the existing knitted-in pattern to make it look kind of tribal rather than nana-esque… or at least, that was my intention.

After weeks of stitching, the tribal kind of pattern I’d envisioned just wasn’t happening and when I tried the cardigan on, I realised it was never going to look right on me. Who knows why I persist in trying pastel shades like this when I should know that they don’t work with the rest of my wardrobe! 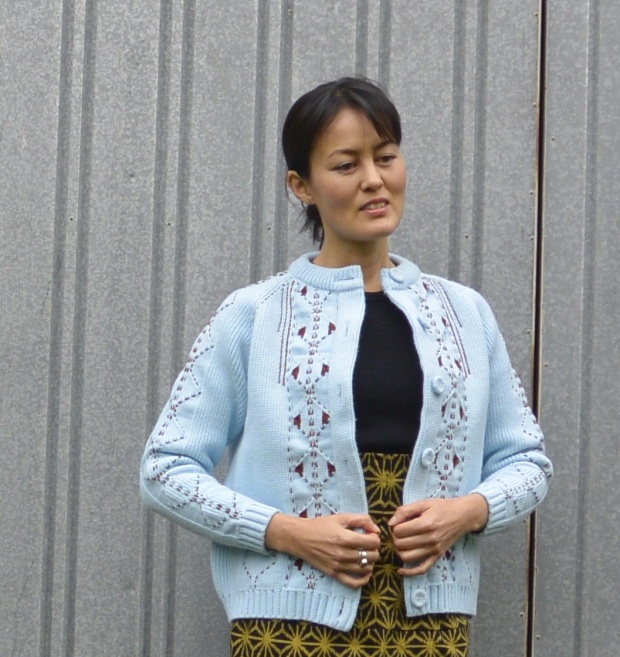 Anyway, just because it doesn’t look right on me doesn’t mean it’s wrong for someone else – and that’s partially what the #WinterWarmUp is about.

Vinnies (and other opshops, I’m sure) experiences a shortage of warm winter clothing every year when the cold weather hits, so they’re asking everyone to clean up their wardrobes and donate quality winter items that they no longer wear. Some of these items will go directly to the people who need them, such as the homeless, while other winter clothing donations will be sold at Vinnies stores, with the profits funding the organisation’s many welfare and support services.

I’m not saying I was one of the bloggers asked to take part in this campaign because I appeal to DIY-ers with hoarding habits, but I’m fairly sure some of my readers might just have some jumpers/scarves/blankets they’ve knitted, sewn, crocheted or woven (?!) that have rarely/never been worn in public for various reasons. Why not go through your craft stash (or your wardrobe) and take those winter clothes you no longer wear down to your local Vinnies?  They’ll warm up the people who need them, and you’ll get the warm fuzzies knowing you’ve made a difference. I’ll be dropping this cardigan off at Vinnies (along with some other pieces) in the very near future.

*Left over from the makings of a teddy bear in about 1985!! What was I saying about hoarding?

One thought on “Vinnies Winter Warm-up”