So, as you would have seen, the good news is that Suki’s fine. However, while that drama is out of the way for the time being, I now have to deal with being unemployed. Yes, that also happened last week, and through no fault of my own (basically the big bosses decided to get rid of all the casual workers… including me). So it’s back to pondering the irksome subject of what I want to do with my life, which I’ve been doing for the past few years as it seems that anything I actually enjoy makes NO money whatsoever. (This is one of my pondering poses). 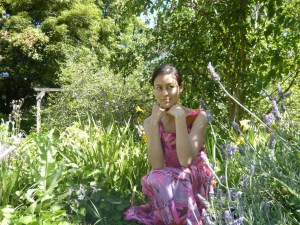 In the meantime though, a friend has asked me to make a dress for her to wear to her sister’s wedding in December, which gave me an excuse to try out this pattern which I bought a few years ago.

Gorgeous, elegant, 30s style, yes? As I’d never used it (like the other hundred or so patterns I own.. aggh) I decided to do a trial using some fabric that I got at the Salvos recently for a few dollars and is most likely 70s nylon and therefore completely inappropriate for this sort of style. It’s also VERY see-through so it’s lucky there’s a fair bit of dapple in this area of the garden!!

Even if it’s made in non-see-through stuff though, the back is still very open, so the ladies who wore this style originally must have gone completely bra-less. It’s not like they had those silicon stick-on things back then! (speaking of which, has anyone else had a giggle over those horrible fake nipple silicon things that are sold at Lincraft!? The other day when I went, there was a whole rack of ..um.. breast enhancing products, including some silicon things that you wear to make you look like you’ve just stepped out of a freezer or something…you know, what guys would refer to as high beam…) 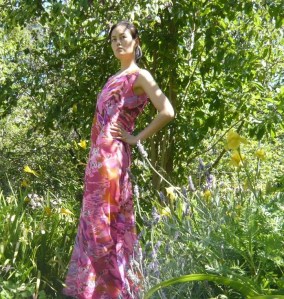 Um, anyway, back to the dress… it was interesting making it as I’ve never sewn anything bias-cut before. Has anyone ever used the vintage re-issue patterns like this one? I’m wondering whether they are direct replicas of vintage patterns or whether they have been rejigged for today, the main reason being that nothing on the inside of the pattern was finished off neatly. There are no allowances given for seams to be overlocked, neatly edged or anything like that so the inside looks really rough (well, it would if you could see anything properly, as this material has a pretty loud print which hides a lot of flaws!) 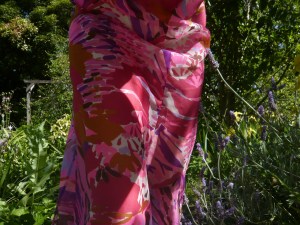 The dress is not quite finished as I still have to make a belt and the strap tubey-thing details, but it was such a beautiful day that I wanted to capture it while I could. Again, let me stress that this was a TRIAL so the actual dress I’m making for my friend will be in a different fabric, although still patterned rather than plain. I’ll try to butter up the said friend so she can model it for you once it’s finished.

Category : poncing around in the garden rather than searching for the meaning of life, procrastinating, Salvos, vintage patterns

20 thoughts on “Vogue Vintage… in nylon?”